What do "Under fitting" and "Over fitting" really mean? They have never been clearly defined

I am always getting lost when dealing with these terms. Especially being asked questions about the relationship such as underfitting-high bias (low variance) or overfitting-high variance (low bias). Here is my argument:

In statistics, **overfitting is "the production of an analysis that corresponds too closely or exactly to a particular set of data, and may therefore fail to fit additional data or predict future observations reliably".1 An overfitted model is a statistical model that contains more parameters than can be justified by the data.2 The essence of overfitting is to have unknowingly extracted some of the residual variation (i.e. the noise) as if that variation represented underlying model structure.[3]:45

Underfitting occurs when a statistical model cannot adequately capture the underlying structure of the data. An under-fitted model is a model where some parameters or terms that would appear in a correctly specified model are missing.2

Based on this definition, both under-fitting and over-fitting are biased. I really could not tell which one has a higher bias. Furthermore, "too closely in training data" but "fail in test data" does not necessarily mean high variance.

If we define underfitting and overfitting directly based on High Bias and High Variance. My question is: if the true model f=0 with σ^2 = 100, I use method A: complexed NN + xgboost-tree + random forest, method B: simplified binary tree with one leaf = 0.1 Which one is overfitting? Which one is underfitting?

You can look into the following figure to get an graphical intuition. Visit the source for detailed illustration. 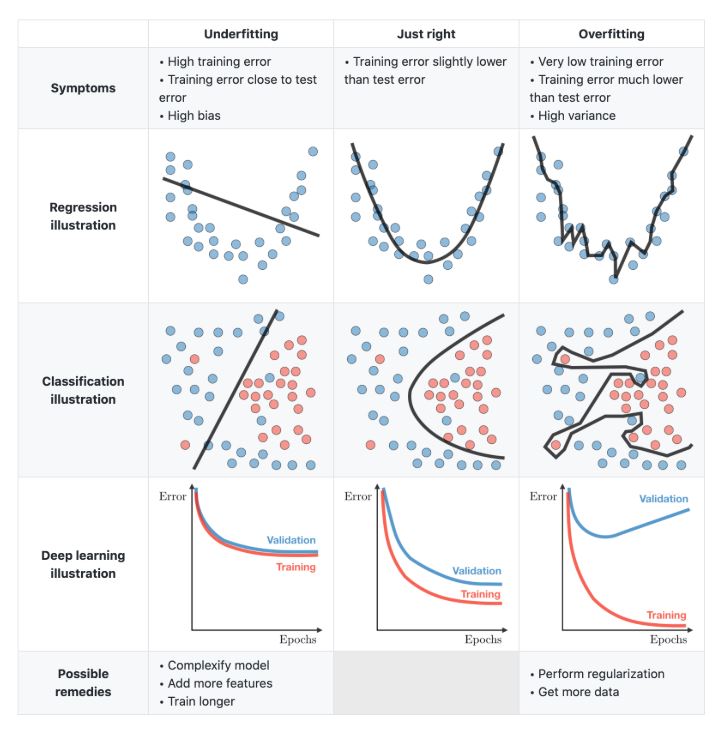 I'll try to make it as simple as possible. Underfitting is when you have high bias and high variance in your model. So the model learns nothing from the training data (low training score aka high bias) and predicts poorly on the test data (low variance). You get underfitting when your model is too simple for the data or the data is too complex for your model to understand.

Here is an example of underfitting:- 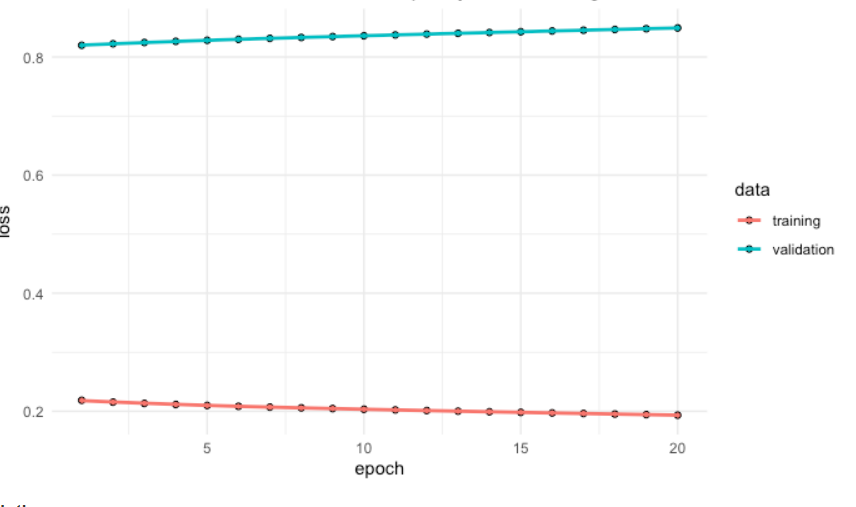 As we can see both train and test scores are poor which means the model learns nothing from the data and performs/predicts nothing on the test set.

Overfitting is when you have low bias and high variance. So the model learns everything from the training dataset (high train score aka low bias) but is not able to perform good on the test set (low test score aka high variance) You get overfitting when your model is too complex for the data or your data is too simple for the model.

Here is an example of overfitting:- 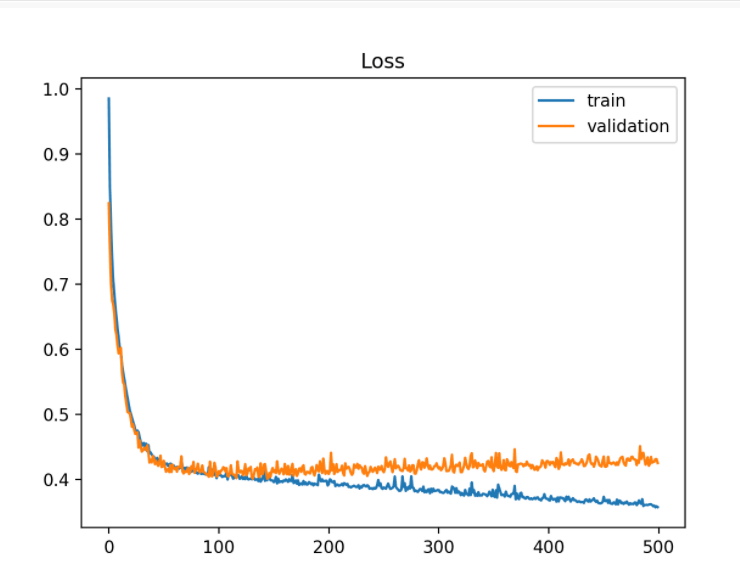 As we can see, the training loss decreases initially (low bias) but the test/validation loss, after decreasing to a certain point starts gradually increasing. Also apparent is the large gap between train and test lines.

Hope that clears the confusion!

This is an idea that is well past it's ``best before date''. In the early days of computational statistics, the most common way of controlling the complexity of a model was to limit the number of parameters (e.g. feature selection for linear models). But that hasn't been true for a long time. The early 1970s saw the introduction of ridge-regression, which introduced the idea of regularisation to control the capacity of a model. It adds a penalty term to the training criterion that penalises large magnitudes of weights. This is mathematically equivalent to placing an upper bound on the squared norm of the weight vector. This implements a simple form of "structural risk minimisation" (c.f. SVM) - if we increase the bound slightly, the model can do anything that it could do before, plus a few other things. So the regularisation parameter forms a set of nested model classes of increasing complexity. This means we can have over-parameterised model that don't over-fit, and indeed that is pretty much what modern machine learning algorithms are all about.

So one thing that would reduce the confusion is not to comflate over-fitting (fitting the data too closely) with over-parameterisation (having more parameters than strictly necessary to represent the underlying structure of the data).

When we "fit" a model, we generally mean we adjust the parameters of the model so that it's output more closely resembles the calibration data according to some criterion that measures the data "misfit". So over-fitting basically means reducing the value "data-misfit" function too much. How much is "too much"? If it makes generalisation performance worse, that is "too much".

If you can make generalisation performance better by using a more complex model (or training it for longer) then your model is currently "underfitting" the data.

Personally I find Victor Lavrenko's explanation of underfitting and overfitting the most intuitive and concise definition:

This definition is very useful for at least these two points:

This situation is not clearly defined since there is no a "standard" difference between train and test error that can guarantee that your model is overfitting, so there is no such thing as significantly better on the test set (as far as I know)

But of course I'm not saying that you should no care about training vs testing error. 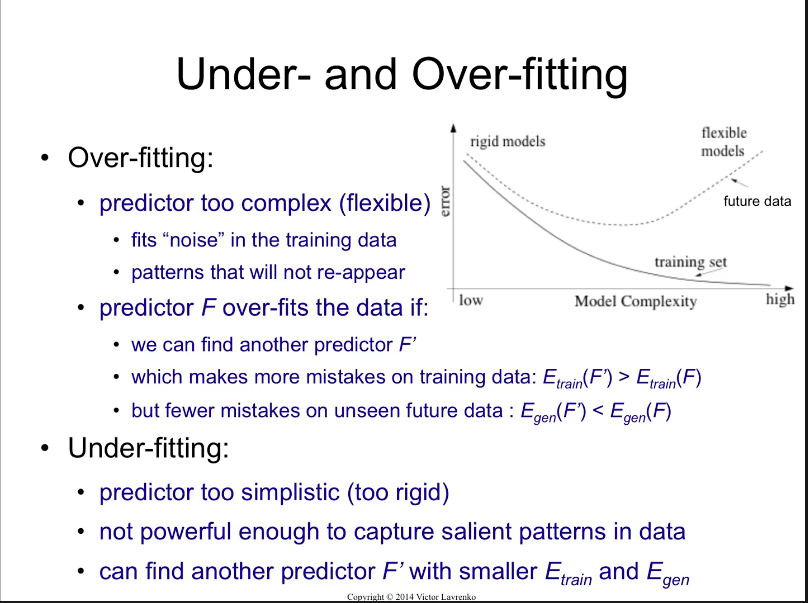 Not the answer you're looking for? Browse other questions tagged machine-learning overfitting terminology bias or ask your own question.

8
Why k-fold cross validation (CV) overfits? Or why discrepancy occurs between CV and test set?
3
Does bias have multiple meanings in Data Science?
0
Décision tree, How to see under/over fitting with just looking at the leafs?
3
Bias-variance tradeoff in practice (CNN)
25
Why underfitting is called high bias and overfitting is called high variance?
1
Decision tree and random forest over fitting
1
Is not having overfitting more important than overall score (F1: 80-60-40% or 43-40-40)?
1
Over fitting and association with regularization
1
Is there a quantitative way to determine if a class of algorithms tends produce low bias or low variance models?