Training a DeepAR time series model with monthly data. Can only train on Daily

I am training a DeepAR model (arXiv) in Jupyter Notebook. I am following this tutorial.

I create a collection of time series (concat_df), as needed by the DeepAR method:

Each row is a time series. This collection is used to train the DeepAR model. The input format expected by DeepAr is a list of series. So I create this from the above data frame:

With this list of time series I then set the freq, prediction_length and context_length (note I am setting frequency to Daily in this first example):

...as well as the T-Naught, Data Length, Number of Time Series and Period:

I create the training set:

..and visualize this with the test set: 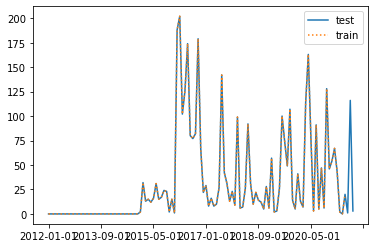 So far so good, everything seems to agree with the tutorial.

I then use the remaining code to invoke the deployed model as explained in the referenced article:

BUT, if I change the frequency to monthly (freq = "M") I get the following error:

This appears to be some kind of Pandas error, as shown here.