Geometric Interpretation of Whether SVMs are performing well or not

I came across this research paper which contained this figure 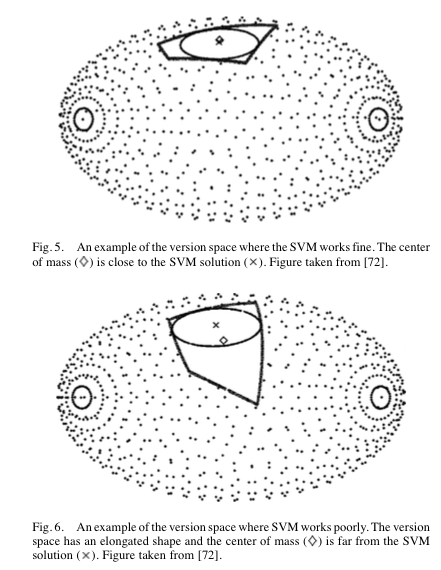 which talks about the center of mass (presumably, of the training dataset's datapoints?) and represents the solution of an SVM as polygon (or is it a point?). I'm having trouble understanding this figure, and since it seems to provide a geometric interpretation of when an SVM performs poorly or not, I'm interested in it. Any thoughts?

A most interesting paper! Following Opper and Haussler$\dagger$, the authors define a version space; the set of unit vectors which separate the training samples:

The reason there is an inscribed sphere is that:

In other words, they are saying that the SVM classifier is not always Bayes optimal. Please see the references for proof. The hypersphere comes about when you consider the margin $\gamma \equiv \min y_i f(\mathtt x_i)$. The support vectors are then the boundaries of the version space which are tangent to the hypersphere.

A cited paper* follows this idea to develop an algorithm to actually estimate the center of mass "by averaging over the trajectory of a billiard ball bouncing in version space." If you're interested in diagnosing SVM failures, perhaps it would help to read that paper too, since it claims to offer a better algorithm instead.

Not the answer you're looking for? Browse other questions tagged machine-learning svm visualization performance supervised-learning or ask your own question.

5
What technologies are fastest at performing joins on large datasets?
1
which application domains are not well suited to deep learning?
1
How to Classify Documents whether they are similar to previous documents or not?
9
Why neural networks do not perform well on structured data?
1
Keras ResNet-50 not performing as expected
2
Prediction for not completely well classified data