How to explain the outcome of k-means clustering?

I am currently conducting some analysis using NTSB aviation accident database. There are cause statements for most of the aviation incidents in this dataset that describe the factors lead to such event.

One of my objectives here is to try to group the causes, and clustering seems to be a feasible way to solve this kind of problem. I performed the followings prior to the beginning of k-means clustering:

After these steps k-means clustering is applied to the vector. By using the events that occurred from Jan 1985 to Dec 1990 I get the following result with number of clusters k = 3:

(Note: I am using Python and sklearn to work on my analysis)

and I generated a plot graph of the data as follows: 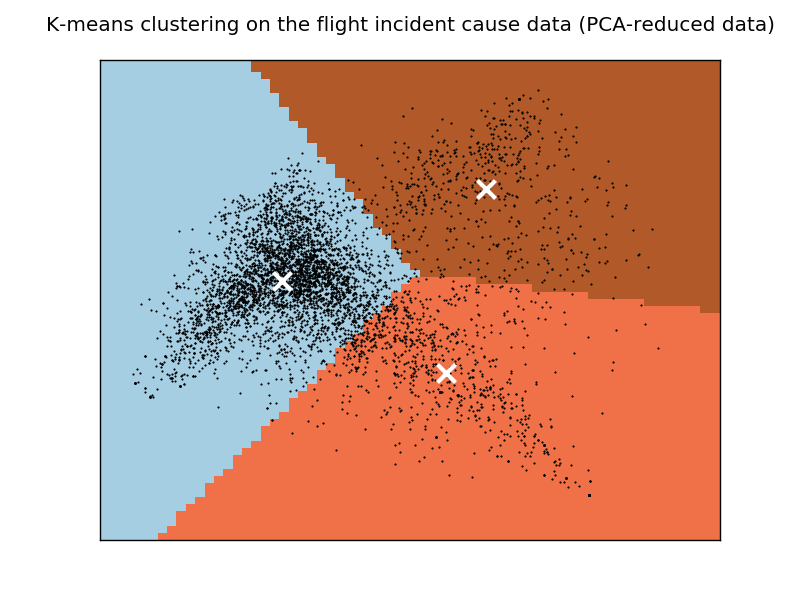 One possibility that I can think of (but I am not sure if it is valid in this case) is the documents with these common terms are actually located at the very centre of the the plot graph, therefore they can not be efficiently clustered into a right cluster. I believe this problem cannot be addressed by increasing the number of clusters, as I have just done it and this problem persists.

I just want to know if there is any other factors that could cause the scenario that I am facing? Or more broadly, am I using the right clustering algorithm?

Thanks StackExchange and Data Science Portal.

I made some similar studies on process descriptions on computers. The main difficulty was to discard words that were not meaningful. Which is hard because:

What I could suggest is:

Not the answer you're looking for? Browse other questions tagged python data-mining clustering scikit-learn k-means or ask your own question.

3
Is Clustering used in real world systems/products involving large amounts of data? How are the nuances taken care of?
9
Confused about how to apply KMeans on my a dataset with features extracted
1
Alternative methods for improved clustering separation?
1
Assigning a new document to a cluster based on keywords extracted and tf-idf
1
Clustering Small Text Descriptions
3
Does K - Means clustering on data reduced using PCA and the original data make any difference?
1
How to improve results for clustering of words
2
Clustering mixed data types - numeric, categorical, arrays, and text