Is R programming a good way to start with Data Science? [closed]

Ask Question
Asked 4 months ago
Modified 4 months ago
Viewed 54 times
0
$\begingroup$
Closed. This question is opinion-based. It is not currently accepting answers.

I am a software engineer (currently CTO) specialized on web and mobile applications picking up data science skills. I do this mainly for future projects within my startup that works in digital healthcare.

For this I have started to learn via Coursera, specifically with this John Hopkin's Data Science specialization which uses R programming as a base.

During these years I've seen how Python is normally the programming language that gets more associations with Data Science and ML and I am now hesitating whether to continue with this or pick another one that uses Python.

Is R better than Python to be future ready? I'd like to avoid having to pick up another skill later on because the first one was not sufficient.

What do you guys think?

Thank you in advance.

Your question carries the risk to attract opinion- rather than fact-based answers. However, here are a couple of hard facts: 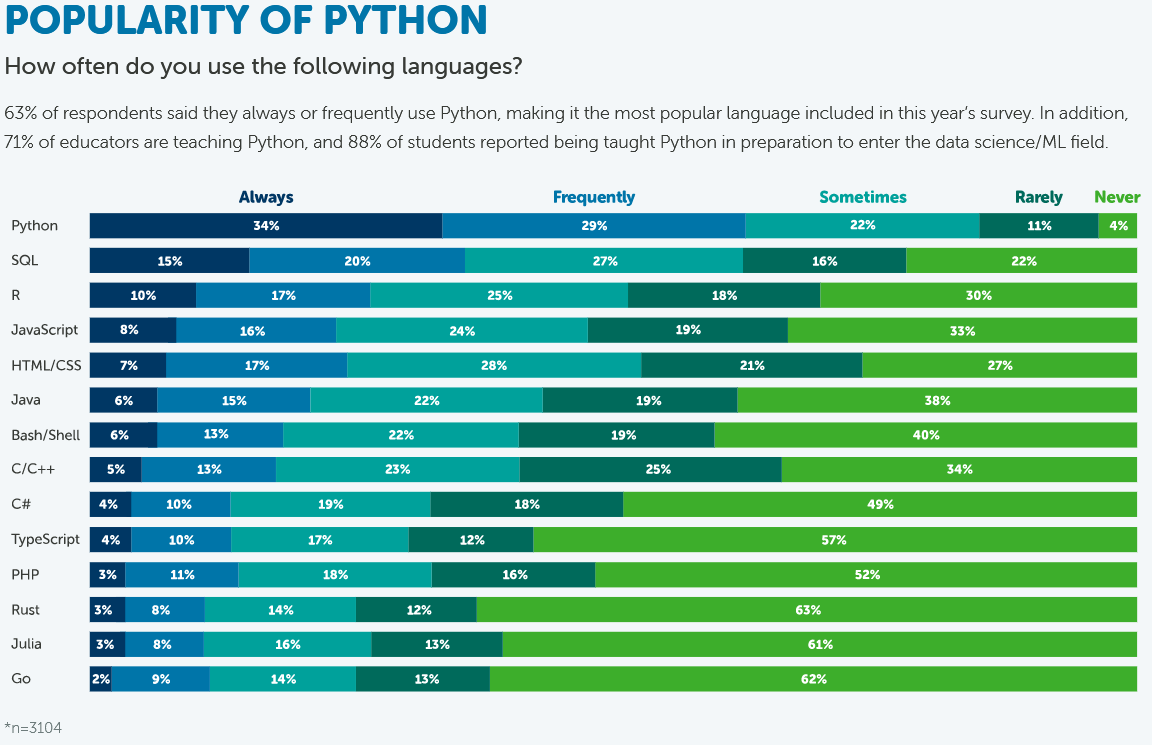 According to their survey, Python is by far the most popular language in Data Science. Moreover, when compared to R specifically, Python has the advantage of being a general programming language.

Another advantage may be its general popularity as it is currently the most popular programming language according to this source, i.e. you may benefit from learning Python beyond Data Science. In contrast, the Stackoverflow developer survey (not Data Science specific) ranks it below JavaScript, HTML and SQL - but still well ahead of R.

Python and R are both very popular in Data Science field, so it's hard to say which one to prefer. From my experience I would say that python is probably more commonly used when it comes to more Data Engineer-oriented positions, while R in more mathematical-modeling-oriented ones, but this is not necessarily a hard rule. I think being a software engineer you will probably also find python easier to learn at a good level, so if I were you I would go with python probably.

One thing that needs to be said though, is that Data Science is a field that needs constant evolution of your knowledge and skills. For instance, Matlab used to be the most commonly used tool in the industry 6-8 years ago and now it is almost completely replaced by Python and R, Neural Networks were completely out of the picture until 2012 that they very quickly became state of the art,etc. So just keep in mind that entering in Data Science - at least from my experience - means that you are willing to keep updating your knowledge.

1
Need some tips regarding starting out with the field's specific programming languages, with a heavy focus on data visualization
0
Coursera's course "How to Win a Data Science Competition"
3
How Object oriented programming approach can be utilised in data science domain?