It is a well known fact that a 1-layer network cannot predict the xor function, since it is not linearly separable. I attempted to create a 2-layer network, using the logistic sigmoid function and backprop, to predict xor. My network has 2 neurons (and one bias) on the input layer, 2 neurons and 1 bias in the hidden layer, and 1 output neuron. To my surprise, this will not converge. if I add a new layer, so I have a 3-layer network with input (2+1), hidden1 (2+1), hidden2 (2+1), and output, it works. Also, if I keep a 2-layer network, but I increase the hidden layer size to 4 neurons + 1 bias, it also converges. Is there a reason why a 2-layer network with 3 or less hidden neurons won't be able to model the xor function?

neural-network backpropagation
Share
Improve this question
asked May 4 '16 at 14:55

Yes, there is a reason. It has to do with how you initialize your weights.

There are 16 local minimums that have the highest probability of converging between 0.5 - 1. 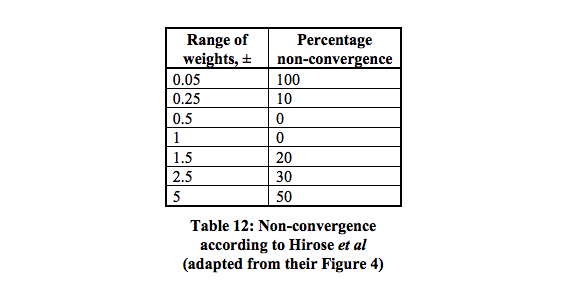 Here is a paper that analyses the xor problem.

A network with one hidden layer containing two neurons should be enough to seperate the XOR problem. The first neuron acts as an OR gate and the second one as a NOT AND gate. Add both the neurons and if they pass the treshold it's positive. You can just use linear decision neurons for this with adjusting the biases for the tresholds. The inputs of the NOT AND gate should be negative for the 0/1 inputs. This picture should make it more clear, the values on the connections are the weights, the values in the neurons are the biases, the decision functions act as 0/1 decisions (or just the sign function works in this case too). 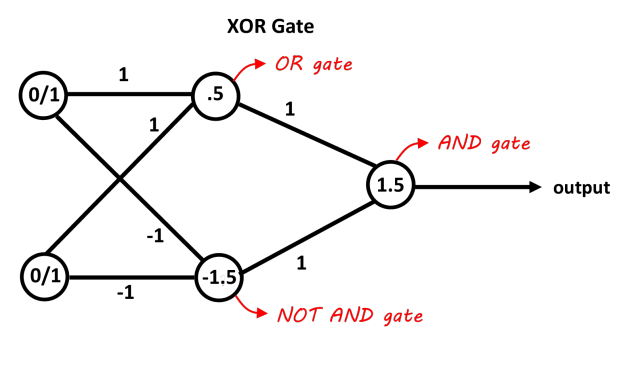 Picture thanks to "Abhranil blog"

If you are using basic gradient descent (with no other optimisation, such as momentum), and a minimal network 2 inputs, 2 hidden neurons, 1 output neuron, then it is definitely possible to train it to learn XOR, but it can be quite tricky and unreliable.