Why does OPTICS use the core-distance as a minimum for the reachability distance?

why isn't it simply

There are a few ways of looking at this. To make this easier I'm going to work describe things in terms of HDBSCAN*, a succesor to OPTICS. HDBSCAN* is essentially the same as OPTICS by removes the $\varepsilon$ parameter (or, if you like, fixes $\varepsilon = \infty$). HDBSCAN* also has a different approach for cluster extraction, but that's not overly relevant here. Thus under HDBSCAN* we define

much the same as OPTICS, but now we don't require any undefined values (we also include the core-distance of $o$ to ensure that mutual reachability is a metric).

One can view both OPTICS and HDBSCAN* as an extension of DBSCAN. DBSCAN takes two parameters MinPts and $\epsilon$ (note that this is a different use of epsilon than OPTICS -- if we focus on HDBSCAN* which has no such parameter we can avoid confusion: epsilon will refer only to the parameter used in DBSCAN).

HDBSCAN* generates a complete hierarchy of clusterings for a range of possible $\epsilon$ values, and thus for any fixed $\epsilon$ value you want the clustering at that level in the hierarchy to be the clustering DBSCAN would give for that $\epsilon$ value (OPTICS works similarly, but simply constrains the range of value that $\epsilon$ may take). To be in a cluster in DBSCAN you must be a core-point (I'm going to ignore border points for now); that is, the point must have at least MinPts other points within a ball of radius $\epsilon$ of itself. If a point isn't a core-point it is noise. The HDBSCAN* (and OPTICS*) reachability-distance captures this distinction by ensuring a point is not joined into a cluster until the DBSCAN $\epsilon$ value is such that the point is within the relevant distance of the other points in the cluster and the point is a core-point at that DBSCAN $\epsilon$ value. The alternative reachability-distance you suggest covers the first part, but not the second: noise points would be included in clusters as long as they were close enough -- and by transitive chaining this could result in clusters merging together prematurely via noise points.

An alternative way of looking at this is by comparing with other algorithms like Robust Single Linkage (which also produces a cluster hierarchy). Robust Single Linkage aims to improve single linkage clustering by making it more robust to noise. In single linkage at each distance-scale $r$ you form a graph by joining points with an edge if they are within $r$ of each other, and then the clustering at level $r$ of the hierarchy is simply the connected components of that graph. The problem is that single linkage is very susceptible to noise -- a point or two in the wrong place can join clusters together when perhaps they shouldn't be. Robust Single Linkage attempts to fix this by requiring a point to have at least $k$ neighbors within $\alpha r$ of it before adding any edges to it. This discounts sparse points until larger distance-scales and makes the approach more robust to noise. It can be demonstrated that this approach provides convergence to the level set tree of the PDF that generated the data -- i.e. it does a good job of fixing the noise issues! If we fix $\alpha = 1$ and $k = \mathrm{MinPts}$ then we recover HDBSCAN*; if we fix $r \leq \varepsilon$ then we get essentially OPTICS. Again we are using core-distance to discount noise, and make the clustering more noise robust.

If you use $dist$ instead of $\text{core-dist}$, then you get single-linkage clustering (hierarchical agglomerative clustering), probably the oldest clustering method out there. Same happens if you set $minPts=1$.

In essence, you pretty much lose any notion of "density" in the algorithm.

When using OPTICS, one wants a reachability-plot as output from which one can read the number of clusters depending on $\varepsilon$. If $\text{dist}$ was used instead of $\text{reachability-dist}$, then some points would have a lower distance in the reachability plot. This could lead to the wrong conclusion that there would be more clusters for some small $\varepsilon$.

The key to Leland McInnes answer is this:

The alternative reachability-distance (using only dist) you suggest covers the first part, but not the second: noise points would be included in clusters as long as they were close enough -- and by transitive chaining this could result in clusters merging together prematurely via noise points.

Consider two dense clusters linked by a set of points that are close to each other transitively (one to the next), but not core-points (not dense). Using dist instead of core-dist would result in these points being added to the same cluster (as they all have the same distance). Using the core distance instead, which is higher for points in the "middle of the chain", they would be put further back in the OrderedList of the output, thus resulting in different clusters. 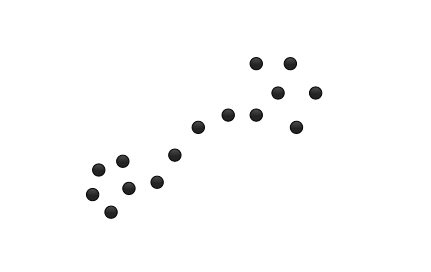 Not the answer you're looking for? Browse other questions tagged clustering or ask your own question.

4
Algorithm for deriving mutiple clusters
0
How to cluster multiple time-series from one data frame
1
Unsupervised Classification for documents
1
How to determine x and y in 2 dimensional K-means clustering?
2
Find shared properties of a cluster samples
1
How to properly use approximate_predict() with HDBSCAN clusterer for text clustering (NLP)?
3
Clustering algorithm which does not require to tell the number of clusters
1
How to use Cosine Distance matrix for Clustering algorithms like mean-shift, DBSCAN, and optics?