which both gives a low p-value, ie we have a positive correlation.

I want to find a point where where the increase of promotion don't increase profit or new_users that must, ie a sweet spot.

Here is 2 plots and the R code for these 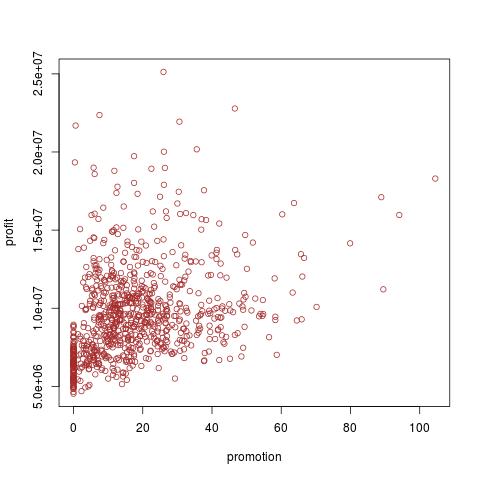 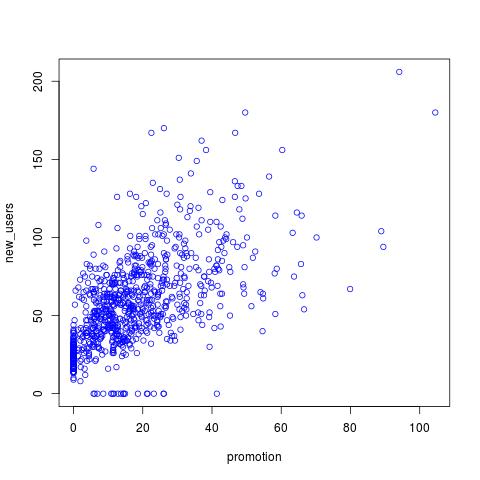 How should this be done?

My thoughts where to make a regression model. For the first one "promotion vs. new_users" one could use a poisons model because it's a count-process, so a model like this would be a good chose?

Or maybe it's not even necessary to use a regression model at all to find a sweet spot?

What would be the right approach to find a sweet spot for the use of promotion ? 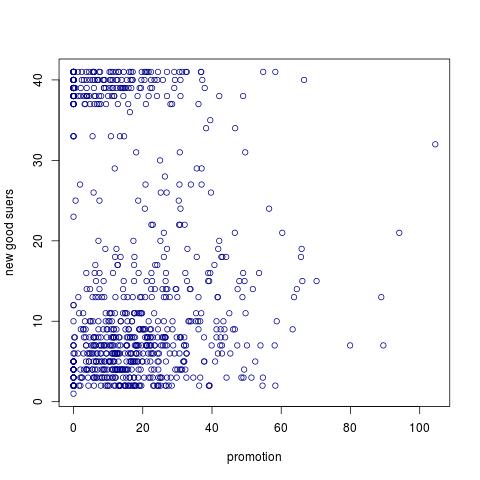 Since I cannot comment because I don't have enough reputation, I will post this as an answer.

If your goal is to "find a point where the increase of promotion don't increase profit or new_users", I won't do a simple regression, since the regression will tell you that if you do more promotions, you will always inscrease the profits. I would say that, in reality, the relationship between promotions and profits or new users is not linear. Because the number of new users is limited and the promotions are not.

A better model is to say that there is a optimal promotion that will give you the best increase of profits and new users.

(if you have a real business to optimise, I would introduce the Customer Lifetime Value of new users. Because generally, the new users you get when doing huge promotions will not come back...)

Sorry to post it as an answer, because of points required for comments. I could not understand the concept of promotion in your case. Possible scenarios:

6
Regression model for a count proces

2
How to predict an approximate weekly/monthly number, when the Unique Daily Visitors for that week/month are already known
1
How to see which transformation is the best
6
Regression model for a count proces
0
Right Regression Model to use
2
How to start building a statistical regression analysis model with multiple categorical/discrete input variables of high dimension in Python
2
Logistic Regression - Coefficients have p-value more than alpha(0.05)
2
Transforming negative correlated non linear variable to linear positive correlated variable
1
Interpretation of coefficient on interactive effects term in regression analysis
0
Are there readily available models that can handle conditional correlation?