Regression model for a count proces

I want to investigate the impact the promotion-value has on new users (count). Since we have a count process I thought it would be best to make a poisson regression model.

When we type summary(model) we get

Here is a plot of the data. 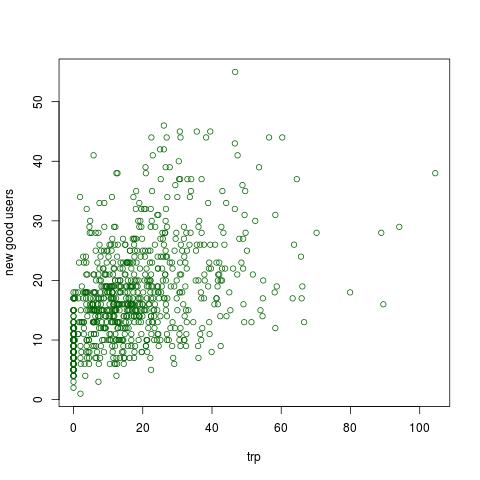 But when I plot the fitted values for the model 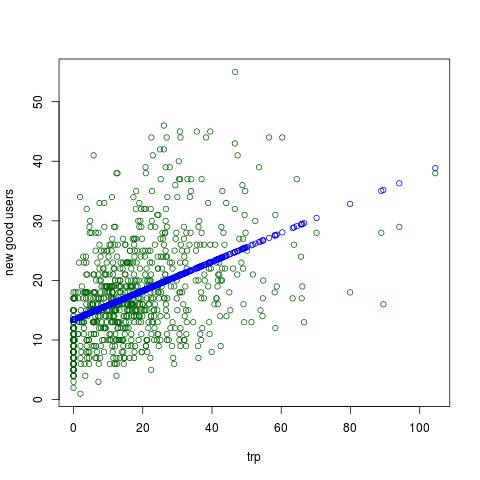 Here is another plot that shows the same but where days with 0 promotion are removed. 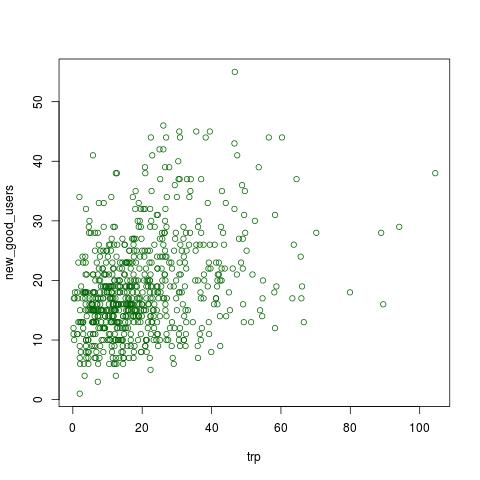 How should I chose my regression model (should I use lm instead of glm) or is the another better approach to solve this? Because the data is not pretty but more random like this what should one do ?

Now I can use wilcox.test to test if there is a significantly difference between the groups by typing

which gives a low p-value, ie group2 has significant higher new_good_users than group1. The same goes for

but for wilcox.test(group4, group3, alternative="greater") I get a p-value at 0.20, ie there is no significant difference in new_good_users between group4 and group3. And the same goes for the rest of the group-pairs up to 10.

So this must mean that if we increase promotion in the first groups we have an increase in new_good_users but in the last groups we do not have that increase. This means that we have a sweet spot at group3 where the promotion-value is 21:30. Is this not correct ?

I have to quote Tukey, perhaps the grandfather of data science:

The combination of some data and an aching desire for an answer does not ensure that a reasonable answer can be extracted from a given body of data.

I see nothing wrong with your Poisson model. In fact its a pretty good fit to the data. The data is noisy. There is nothing you can do about it. Perhaps the noise if due to whatever else is on TV at the time, or the weather, or the phase of the moon. Whatever it is, its not in your data.

If you reasonably think the weather might be affecting your data, get the weather data and add it. If it decreases the log-likelihood enough for each degree of freedom then it's doing a good job and you leave it in. This is regression modelling 101.

Of course there's a zillion other things you can do. Scale the data by any old transformation you want. Fit a quadratic. A quartic. A quintic. A spline. You could include the date and possible temporal correlation effects. But always bear in mind what Tukey was saying - if your data is noisy, you won't get anything much out of it. So it goes.

1
Underlying model for prediction using different prediction variables
1
How to see which transformation is the best
1
Chose the right regression analysis
1
Regression model for continuous dependent variable and count independent variables
2
What kind of plot will be helpful for total count group data ( data grouped by month and year )?
3
Is there a definitive and more conclusive way of interpreting the R^2 score from a linear regression model in terms of prediction accuracy?
3
ML regression poor performance
2
In a residuals vs fitted plot, how do I interpret a homoscedastic variance that is not randomly distributed above/below the line?
2
Logistic Regression - Coefficients have p-value more than alpha(0.05)