I am using a smartphone in my car to gather acceleration data (both longitudinal and lateral). Now, I want to classify my data in real-time based on the acceleration force applied through accelerating, breaking and maybe turning.

Is there a proper method to do this kind of online classification? And also how does one determine whether a "harsh/aggressive" or just "normal" driving style? 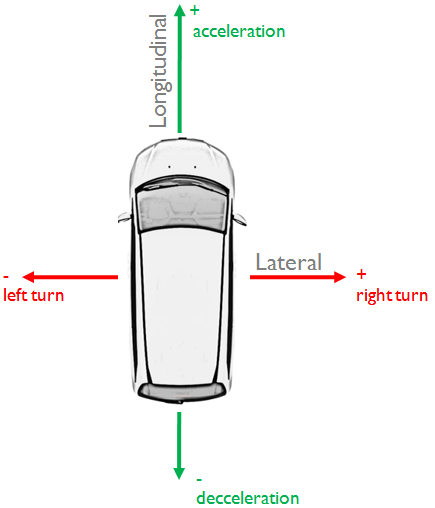 You will first need to decide whether to approach this as a supervised or unsupervised learning problem.

For supervised learning, you would need to take some portion of the data and hand score it as harsh/aggressive and normal. I suggest you not go this route to start. But if you do, I suggest using a support vector classifier for your initial testing.

I suggest approaching this as an unsupervised learning problem. Assuming you tend to be a normal/safe driver you can view this behavior as normal and harsh/aggressive driving as an anomaly or an outlier. This is known as outlier detection.

Feature engineering will play a significant roll in this problem. Despite your attention to the longitudinal and lateral axes of the car, the phone will have arbitrary orientation within the car i.e. it will just be in your pocket. Thus its probably best to factor out the direction somewhat.

First, I would find the length of the acceleration vector (magnitude of acceleration without regard to its directional orientation). Since you have three orthogonal axes, you can just use:

Additionally, you can also integrate the acceleration vector over time and find its magnitude to find the vehicle speed:

Don't forget to think of speed and acceleration as orthogonal values and form a circular function out of the respective z-values for proper outlier detection. You can read about 2D or nD outlier detection and also here

Remember that the equation for a circle is:

We can therefore solve for $r$ and set it equal to $2$ standard deviations.

As an aside, note that since variance is just the square of the standard deviation, you could alternatively think of this in terms of variance.

Now for two standard deviations, the driving is aggressive if:

The online learning component simply requires that you continuously update the means and standard deviations. Though, I suggest that this be done in some sort of batch mode rather than continuously.

Not the answer you're looking for? Browse other questions tagged r classification time-series java online-learning or ask your own question.