I'm currently studying papers about outlier detection using RNN's (Replicator Neural Networks) and wonder what is the particular difference to Autoencoders? RNN's seem to be treaded for many as the holy grail of outlier/anomaly detection, however the idea seems to be pretty old to, as autoencoders have been there for a long while.

The main difference seems to be the way how the input is compressed:

Plain autoencoders squeeze the input through a hidden layer that has fewer neurons than the input/output layers.. that way the network has to learn a compressed representation of the data. 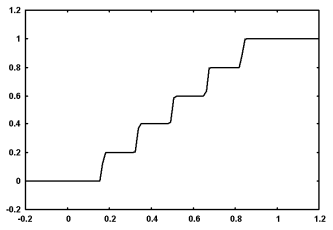 RNNs were originally introduced in the field of data compression [5]. Hawkins et al. proposed it for outlier modeling [4]. In both papers a 5-layer structure is recommended, with a linear output layer and a special staircase-like activation function in the middle layer (see Fig. 2). The role of this activation function is to quantize the vector of middle hidden layer outputs into grid points and so arrange the data points into a number of clusters.

Not the answer you're looking for? Browse other questions tagged neural-network anomaly-detection autoencoder outlier or ask your own question.