I am trying to validate a classifier using two different training and testing datasets.

The feature I am considering is a feature constructed doing the fold-change between two original features, i.e. $log2(feat_A / feat_b)$

The problem is that, across the two different datasets, I see the same distribution of fold-change across groups but with different values. See, in the images attached, the values for each group (each box) in the different datasets (each plot). 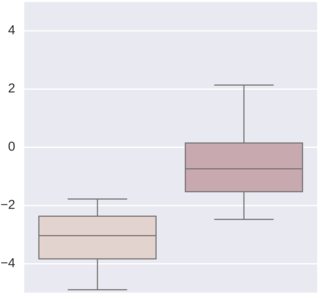 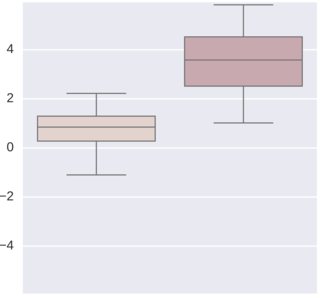 What may be causing the differences in fold-change? In this case the fold-change is different also in sign, which means that while in one dataset $feat_a$ is greater than $feat_b$, the opposite is true for the other dataset. However, the pairwise relation between the two groups (the two boxes in each plot) is maintained.

I was thinking about different normalization procedures on each feature across different dataset, which may explain the shift of the distribution of the fold-change. What other problems may be in these datasets?

It'd be easier to understand if the plots were labeled. Nonetheless, I think I understand the question, and perhaps it's just sampling error. Why do you have two different pairs of train and test data? Are they from different sources? In that case, you probably don't want to be using the same classifier on both. Also, what do you mean 'validate' using two different train and test sets? Classifiers are trained on a train set, and validated on a test set, what do you mean you're validating on two different train/test pairs?

Not the answer you're looking for? Browse other questions tagged classification dataset distribution or ask your own question.

6
Plotting different values in pandas histogram with different colors
2
How to resample one dataset to conform to the distribution of another dataset?
5
For imbalanced classification, should the validation dataset be balanced?
1
What is the intuition of using clustering for performing feature engineering in machine learning tasks?
2
Feature selection for two seperate datasets
0
Comparing distributions Python