Optimal parameter estimation for a classifier with multiple parameters 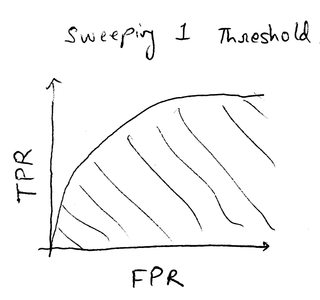 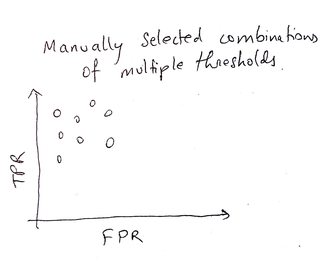 The image on the left shows a standard ROC curve formed by sweeping a single threshold and recording the corresponding True Positive Rate (TPR) and False Positive Rate (FPR).

The image on the right shows my problem setup where there are 3 parameters, and for each, we have only 2 choices. Together, it produces 8 points as depicted on the graph. In practice, I intend to have thousands of possible combinations of 100s of parameters, but the concept remains the same in this down-scaled case.

I intend to find 2 things here:

In the case of the ROC curve on the left, this is done easily using the following methods:

However, for my case in the image on the right, I do not know if the methods I have chosen are the standard principled methods that are normally used.

I have found a lot of reference material for the ROC curve with a single threshold and while there are other techniques available to determine the performance, the ones mentioned in this question is definitely considered a standard approach. I found no such reading material for the scenario presented on the right.

Bottomline, the question here is two-fold: (1) Provide methods to evaluate the optimal parameter set and overall performance in my problem scenario, (2) Provide reference that claims the suggested methods to be a standard approach for the given scenario.

The answer depends a lot on what you want to achieve:

In first case, you have to scan this audience's publications, see what they use, and use the same. There isn't a perfect metric, since actually it depends on the business' cost-ratio.

In the second case, all you need is the cost-matrix and the result follows naturally. Optimizing anything which isn't the cost-matrix is a rather academical exercise. The cost-matrix has one parameter and depends really on the business. No reference is going to solve this decision for you. The discussion between performance metrics is missing the point. There is only one answer once you manage to squeeze out a cost-matrix from your business stakeholders. In a business anything can be estimated in terms of money. It only gets tricky, if it more complex than a single class weight.

So the answers are:

In that sense, ROCAUC is actually a pretty meaningless artifical metric, despite being popular. There is an interpretation which relies on the fitted model's probabilities being correctly estimated, but if you want to get real, only cost matrices matter. Model the real world impact of you model and you'll get answers!

PS: I personally consider TPR-FPR the best bet in absence of a defined cost matrix.

Not the answer you're looking for? Browse other questions tagged machine-learning optimization performance parameter-estimation or ask your own question.