Why augmenting the training data with binary attributes works better for our dataset? 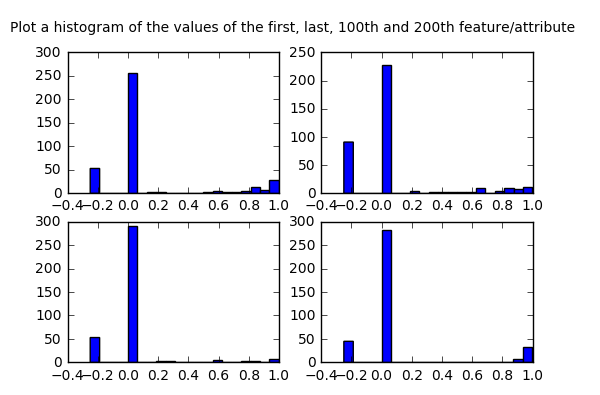 We thought that this looked like some categorical data where few of the times had a special negative number and other times were zero.

In other words we did the same thing as if we had three categories for each attribute A, B and C and we wanted to encode them with one-hot-encoding. Where here the A is 0, B is our special negative value and C is anything else. Recall that in one hot encoding you throw away one of the three columns because it is redundant.

Experiments to test our assumption

Second test: Linear Regression with the binarized features (2 columns for each feature, we had twice as much features)

The results was that the first experiment performed worse than the rest which was expected.

The surprising result was that when combining the initial data with our binarized ones (augmented dataset with three times more features than the original one) the RMSE was even lower!
Why is that?

With the information provided is difficult to draw conclusions. But theoretically speaking this is absolutelly possible. There is what in Data Science is called the curse of dimensionality wich can explain these phenomena (I mean decreasing performance while increasing the number of features). In Machine Learning, the Hughes phenomenon shows that

...With a fixed design pattern sample, recognition accuracy can first increase as the number of measurements made on a pattern increases, but decay with measurement complexity higher than some optimum value.

Maybe this will give you some intuitions or point some aspects of your experimental setting that might be linked to the lower results.

Not the answer you're looking for? Browse other questions tagged linear-regression data-augmentation or ask your own question.

0
should we include or exclude a variable in a logistic regression based on the description below?