How are the positions of the output nodes determined in the Kohonen - Self Organizing Maps algorithm?

Now the user who is going to implement the SOM has the input data and the randomly initialized weight vectors. How is $d_j,_i$ determined? Is it randomly initialized too? Also what is the relation between the weight vectors of the output nodes and their positions? The figure below is just to give a visual representation of the organization of the input and the output nodes

The distance is calculated according to a distance function (euclidian, manhattan, mahalanobis and so on. As this is an unsupervised model (hence the self-organizing part in the name) there are no output neurons. Would you clarify the term?

In order to somewhat guarantee a topological mapping two things should be considered now:

Let's visualize this on this picture real quick. The red nodes are inputs. The dark grey is the winning neuron for the input that is considered right now (the picture does not make it clear that we look at one example/input at a time!). The light grey nodes are the ones that are within the neighbourhood of the winning neuron and hence are updated slightly according to some updating rule. 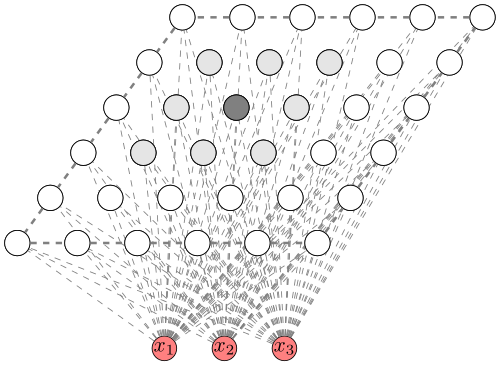 Disclaimer: this was from the top of my head right now, please check any formulas or hypotheses I propose here before using it in any kind of work. (Which you should always do!) . See also wikipedia, they also have some explanation of the algorithm that might better suit you.

I am struggling with the same question. I think the most import answer on this is this comment of C. S.:

The neurons don't move. We just change the weights. They stay fixed on the very position of the frame we initialized them on.

In my understanding the positions aren't changed at all. The only propose of the grid is to define the neighborhood of each node. Neither the neighborhood, nor the distances of the map space change. Everything dynamic happens in the weight space.

But if you closely read the description, it says, it displays the distance in the weight space.

Not the answer you're looking for? Browse other questions tagged machine-learning neural-network clustering dimensionality-reduction gaussian or ask your own question.

2
What is an interpretation of the $\,f'\!\left(\sum_i w_{ij}y_i\right)$ factor in the in the $\delta$-rule in back propagation?
66
How are 1x1 convolutions the same as a fully connected layer?
6
Step-by-step construction of an RBF neural network
2
About neural network called “Self Organizing Maps”
5
Neural Network Self-organizing maps
3
Finding orthogonal input patterns associated with logistic function output
1
How to compare the output of Self-organizing maps?
0
Neural Net Backprop Weight updating Pseudo code help please