t-SNE: Why equal data values are visually not close?

I have 200 data points that have the same values on all features.

After t-SNE dimension reduction they doesn't look so equal anymore, just like this: 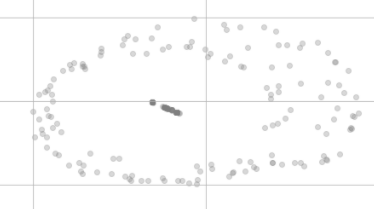 Why aren't they on the same point in the visualization and even seems to be distributed in two different clusters?

visualization dimensionality-reduction tsne
Share
Improve this question
edited May 18 '17 at 9:30
ScientiaEtVeritas
asked May 17 '17 at 12:58

You're correct that the same values in T-SNE can be distributed across different points, the reason this happens is clear if you take a look at the algorithm that T-SNE runs across.

To address your first concern about the points actually not being the same after the algorithm has been applied to the dataset. I will leave you with an exercise to verify it for yourself, consider a simple array $x_1 = [0,1]$ and $x_2 = [0,1]$ and run actual algorithm against it and see for yourself that the resultant points are not actually identical.You can cross reference your answer against this.

You'd also observe that changing the random_state actually modifies the output co-ordinates of the model. There isn't any real correlation between the actual co-ordinates and their output. Since the first step of TSNE computes the conditional likelihood.

Now coming to whether the absolute co-ordinates in $\mathbb{R}^2$ have any significance. They really don't. The randomness can redistribute the points wherever you want them to go. However, what is more interesting is the ratios of the distances between the points and these are relative and are relative even when we project it onto higher dimensions which is pretty interesting.

So, the truth is, rather than looking at the two clusters, look at the distances between them, because that conveys more information than the co-ordinates themselves.

Hope this answered your question :)

Not the answer you're looking for? Browse other questions tagged visualization dimensionality-reduction tsne or ask your own question.