Using time series data from a sensor for ML

I have the following data for a little side project. It's from an accelerometer sitting on top of a washer/dryer and I'd like it to tell me when the machine has finished. 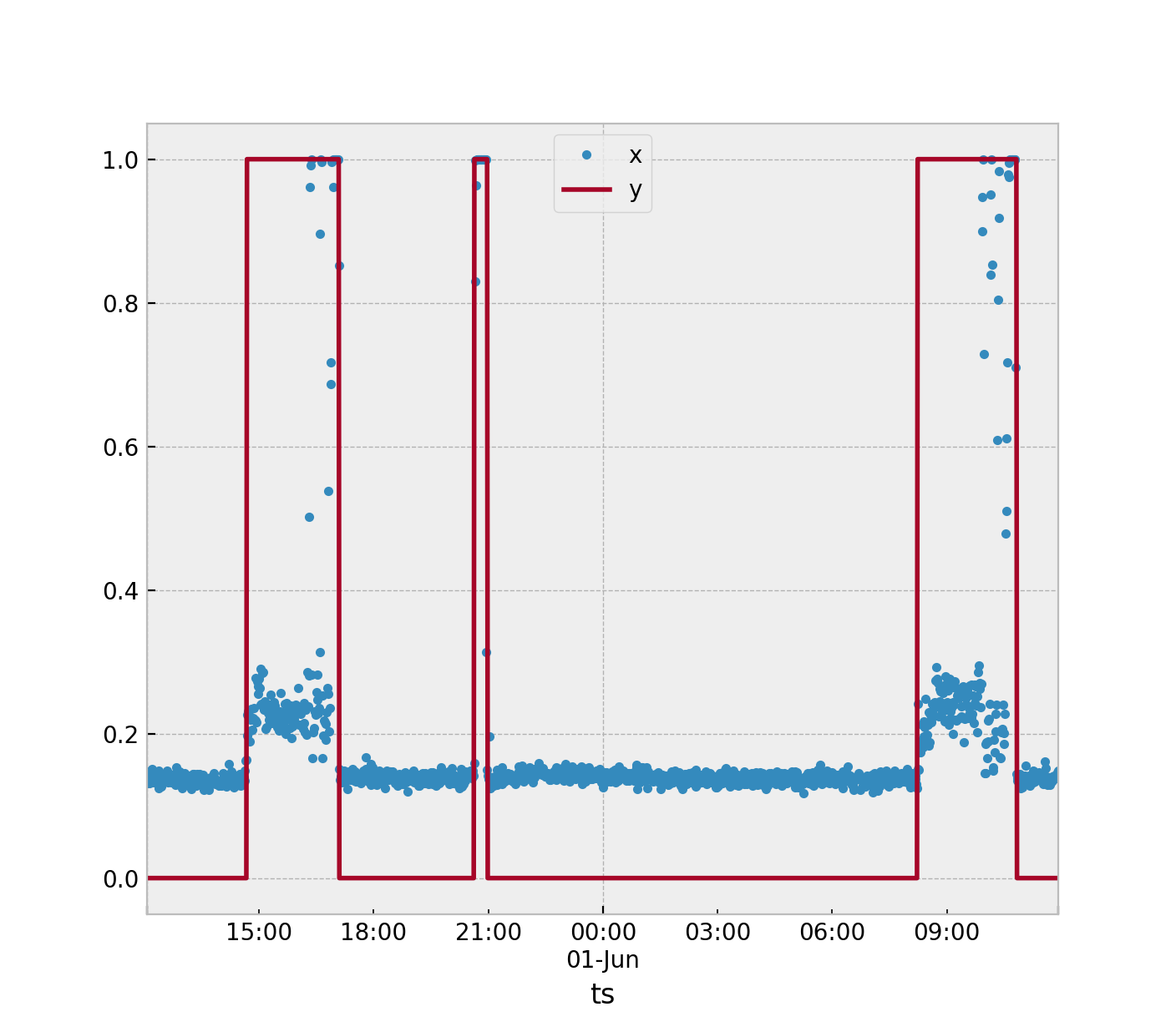 x is the input data (x/y/z movement as one value), y is the label on/off

Because the x values overlap for y=1 and y=0, I was thinking of using x and a rolling 3 minute window as inputs for a SVM: 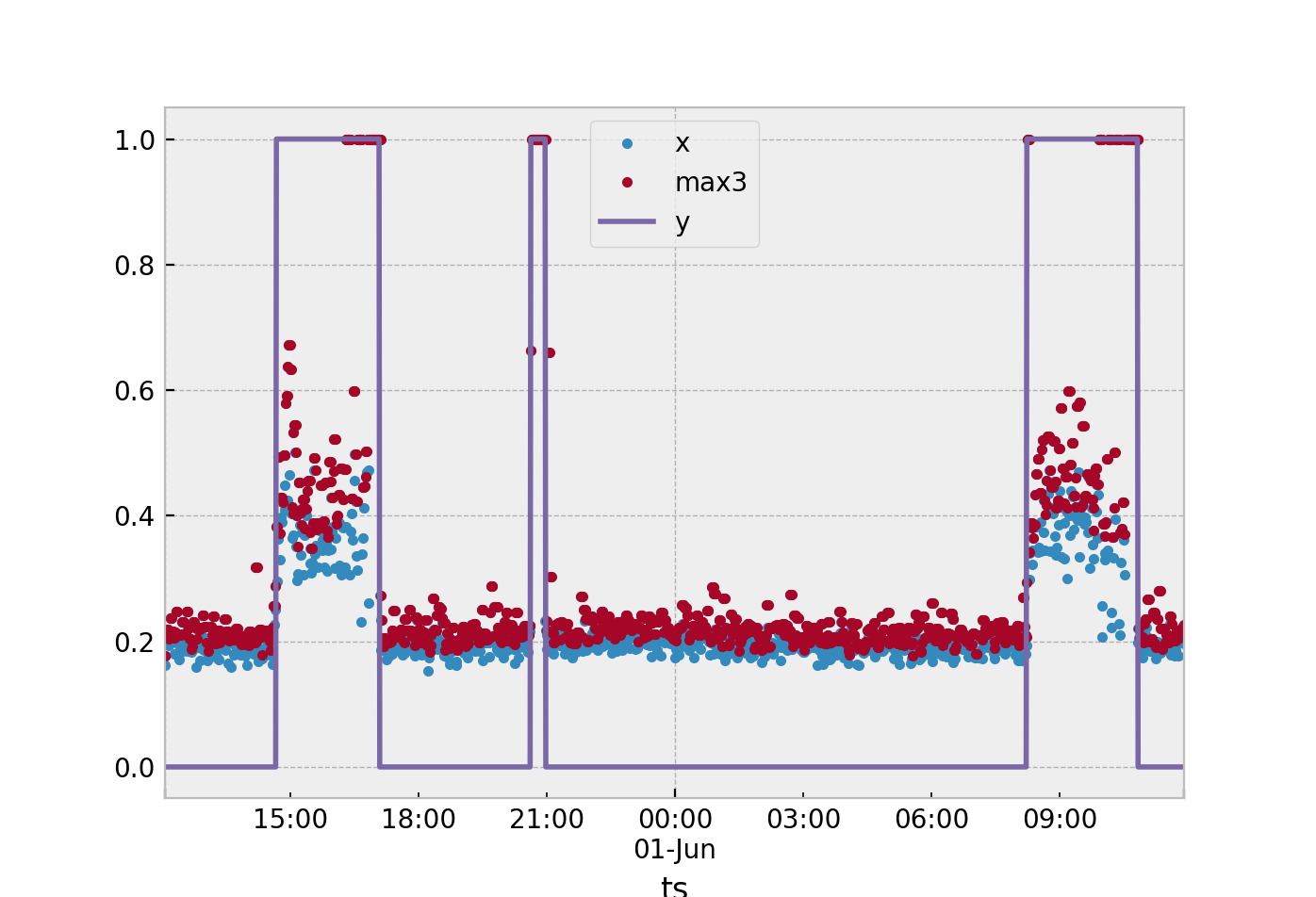 Is this a good approach for this kind of problem? Are there alternatives that might produce better results?

You have time series data which is used to measure the acceleration. You which to identify when the machine is in its nominal state (OFF) and anomalous state (ON). This problem would be best solved using anomaly detection algorithms. But, there are so many ways that you can approach this problem.

All of the methods will rely on the feature extraction method you select. Assuming we continue to use the 3 sample time window as you suggested. In this algorithm you will calculate a statistic for this nominal state $y = 0$. I would suggest the mean as I assume you are already doing, take the average of the three sample resultant accelerations. You will then be left with a large number of values in a training set $S$ defined as

where $s$ is the mean of the tree samples in a window. $s$ is defined as

where $x$ is your sample observations and $i\geq2$.

Then collect more data if it is possible with the machine active such that $y = 1$.

Now you can choose if you want to train your algorithm on a one-class dataset (pure anomlay detection). A biased dataset (anomaly detection) or a well-balanced dataset. The balance of the dataset is the ratio between the two classes in your dataset. A perfect dataset for a 2-class classifier would be 1:1. 50% of the data belonging to each class. You seem to have a biased dataset, assuming you don't want to waste a lot of electricity.

Do note that there is nothing stopping you from keeping the neighboring samples split as an instance in your dataset. For example:

This would make a 3-dimensional input space for a specific output which is defined for the currently taken sample.

The easiest way that i would suggest. Assume you are using a single statistic to define what is happening throughout the 3 sample window. From the collected data get the maximum $s$ of your nominal points ($y=0$) and the minimum $s$ of your anomalous points ($y=1$). Then take the halfway mark between these two and use that as your threshold.

If a new test sample $\hat{s}$ is larger than the threshold then assign $y=1$.

But I want to get fancy!

There are a number of other techniques you can use to do this exact task.

Simply put, almost every machine learning algorithm is well suited for this purpose. It just depends on how much data is available to you and it's distribution.

I really want to use SVM

If this is the case keep the three samples completely separated. Your training matrix will have 3 columns as discussed above. And then you will have your outputs $y$. Using SVM in python is very easy: http://scikit-learn.org/stable/modules/svm.html.

This trains your model. Then you will want to predict the outcome for a new sample.

Not the answer you're looking for? Browse other questions tagged machine-learning time-series feature-engineering or ask your own question.