What is the feature matrix in word2vec?

I'm a beginner in neural networks and currently I'm exploring the word2vec model. However I'm having a tough time to understand what the feature matrix exactly is.

I can understand that the first matrix is a one-hot encoding vector for a given word, but what does the second matrix signify? More specifically, what does each of those values (ie. 17, 24, 1 etc) mean?

The idea behind word2vec is to represent words by a vector of real numbers of dimension d. Therefore the second matrix is the representation of those words.

The i-th line of this matrix is the vector representation of the i-th word.

To my knowledege, there are no "human meaning" specifically to each of the numbers in these representations. One number is not representing if the word is a verb or not, an adjective or not... It's just the weights that you change to solve your optimization problem to learn the representation of your words.

This tutorial may help : http://mccormickml.com/2016/04/19/word2vec-tutorial-the-skip-gram-model/ even though I think the image you put was from this link.

You can also check this, which may help you get started with word vectors with TensorFlow : https://www.tensorflow.org/tutorials/word2vec

The first matrix represents the input vector in one hot format

"what the feature matrix exactly is"

It seems you have not understood the representation correctly. That matrix is not a feature matrix but a weight matrix for the neural network. Consider the image given below. Especially notice the left top corner where the Input Layer matrix is multiplied with the Weight matrix. 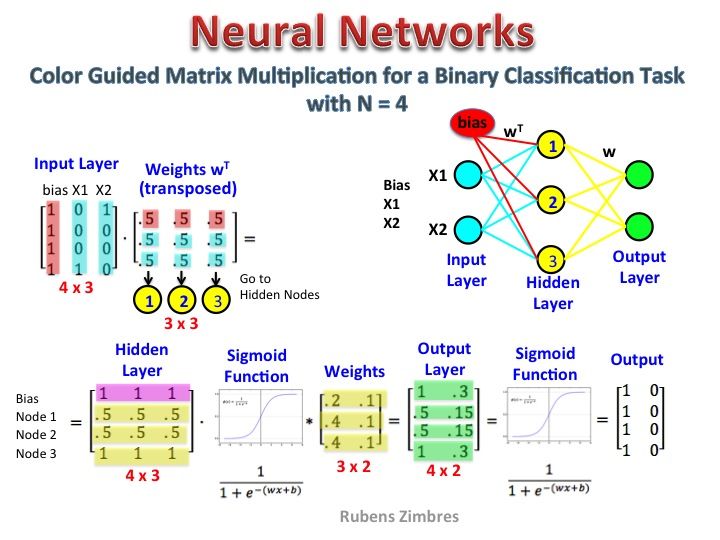 So, to answer your question, the equation you have posted is just the mathematical representation for the neural network which is used in the Word2Vec algorithm.

As Word2Vec trains, it backpropogates into these weights and changes them to give better representations of words as vectors.

Once training is complete, you use only this weight matrix, take [0 0 1 0 0 ... 0] for say 'dog' and multiply it with the improved weight matrix to get the vector representation of 'dog' in a dimension = no of hidden layer neurons.

In the diagram you have presented, the number of hidden layer neurons is 3

So the right hand side is basically the word vector.

Not the answer you're looking for? Browse other questions tagged machine-learning neural-network word2vec or ask your own question.

10
How to overcome training example's different lengths when working with Word Embeddings (word2vec)
10
Features of word vectors in Word2Vec
3
One hot encoding vs Word embedding
1
Conjugated gradient method. What is an A-matrix in case of neural networks
10
Word2Vec how to choose the embedding size parameter
19
BERT vs Word2VEC: Is bert disambiguating the meaning of the word vector?
0
Models after word2vec outputs
1
How does backpropagation work with averaging layers?
2
word2vec: usefulness of context vectors in classification