As a part of my university project, I am researching/developing a sentiment analysis model wherein I am trying to combine NLTK Vader (SentimentIntensityAnalyzer) results with a Machine Learning trained classifier for prediction of Sentiments on Twitter data.

To explain what I am trying to do is - Combine Machine Learning classifier and NLTK Vader sentiment analysis to get the better classification of tweets as Positive, Negative or Neutral.

What I have done is -

Question - So is it correct to add it this way?

I could also convert these polarities to binary values to mark if the overall sentiment is positive, negative or neutral using 0 and 1.

Though it has increased the overall accuracy of the classifiers by small margin of 1-2%.

But am I doing it right? If not, kindly let me know how can I collaborate the two mentioned above, i.e. NLTK Vader results with Machine Learning classifiers.

Interesting approach, but the whole purpose of NLTK Vader is to have a pre-trained model. After all, NLTK Vader was manually (!) labeled.

I just tested Google vs. NLTK Vader on "I did not hate this movie" (negations are notoriously hard to catch for an algorithm) and NLTK Vader did much better than Google. NLTK Vader scored it kind of positive (0.45) while Google scored it negatively (-0.6). 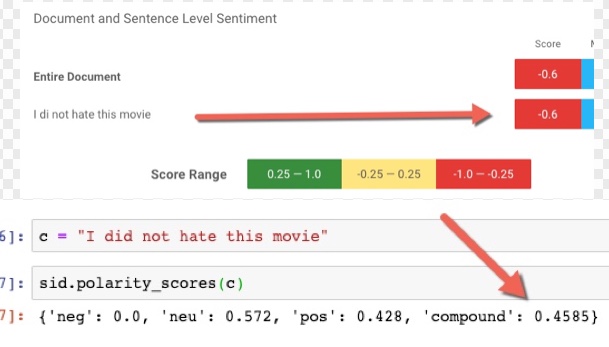 I'll go through your questions one by one:

Question - So is it correct to add it this way?

It's a potentially good approach. A potential improvement (but that's a personal opinion) is to change the overall polarity scores with something else. I think that approach is too much "bag of words" (i.e. it looses the sequence information).

Since you are familiar with Neural Networks, I would suggest you to employ RNNs. Here's why: when you are working with natural language, sometimes the order of words is more important than the meaning of the word itself. Sometimes the order of words itself determines their meaning! That's why NLP achieves state-of-the-art performances when models that are able to understand sequences are employed (such as RNNs).

I could also convert these polarities to binary values to mark if the overall sentiment is positive, negative or neutral using 0 and 1.

That's a great point. In this way, you can train an RNN to read the sequence, and based on both word representations and their sequence, you can come to a classification.

The model I have in mind would start with recurrent layers (LSTM or GRU), that would learn a representation of the sequential information. Later, this information would be passed to dense layers, that can then perform the classification task.

If you are working with Neural Networks, I suggest you to use three output nodes with a softmax activation function (for the last layer).

But am I doing it right? If not, kindly let me know how can I collaborate the two mentioned above, i.e. NLTK Vader results with Machine Learning classifiers.

Your model can be good, I only suggested potential improvements.

Another thing I'd suggest is to use word embeddings, such as word2vec or Glove, instead of tf-idf representation of words. That is because Neural Networks love dense vectors, while they tend to work not so well on sparse vectors (such as tf-idf). You can find pre-trained datasets online just googling them.

Good luck with your task!

Not the answer you're looking for? Browse other questions tagged machine-learning neural-network scikit-learn sentiment-analysis nltk or ask your own question.