Simplified question: I have a dataset of how well certain agents perform on certain tasks, and based on this I've trained a model that can make predictions for newly incoming tasks. I'd like to make an algorithm that distributes tasks amongst agents to maximise performance.

One way would be to make a prediction for each scenario - each agent assigned to each new set of tasks (note that one agent can work on more than one task at a time) -, thus iterating through all possible solutions, and summing performance and finding the max.

This, however, would be very complex - to iterate through every possible combination an finding a maximum.

Is there a better way to optimise (maximise performance) without having to iterate through all possible solutions? How could I do that?

Let's take a look at the following setup:

I'd like to know if there's any ML algorithm that can learn how to assign jobs to agents as to minimise time spent working (maximise performance).

I teach an SVM (or a regressor, or a neural net), that will be able to predict how well a certain agent A1 performs on a certain (type of) task T1 (call this performance P1). So when a new task comes in, I'll be able to predict P1 based on A1 and T1. BUT! And here comes the question. Now that I can predict P1 based on A1 and T1, how do I use this knowledge to actually assign ALL the tasks - T1...Tn amongst all the agents A1...Am as to maximise the performance: sum(P1, P2, ..., Pi)?

In general Genetic algorithms can deal with this kind of optimization problems. The tricky part is to define the population with this particular assignment problem. Assuming a given set of tasks T1...Tn to achieve, an "individual" in the population would probably be an assignment A1...An, that is a possible assignment of the tasks to a (subset of) the agents. Thus the tasks play the role of the "genes":

The rest is straightforward genetic learning:

After a few generations the population will converge to a set of optimal assignments. Mind that it might end up in a local optimum, you can tune the hyper-parameters to minimize this risk.

Some ideas:1. Could you assign features for jobs and assignments? Performance would be the labels. Then you could simply use an SVM for example. 2. Given a user representation matrix X, each row i is an agent, and a job representation matrix Y, each j is a job representation, and a matrix of performance P, where every row stands for a user and every column how well the agent performed on that job, you could learn X and Y through optimization. Check this: https://en.wikipedia.org/wiki/Non-negative_matrix_factorization I hope this helps.

I just had another idea.

Why don't you uniformly randomize the assignments. For each randomization of assignments, calculate the cost.

Run this, for I don't know how many times. Pick the configuration with the least cost.

Because of linearity of expectation, this should give you a good enough answer, might not be the optimal, but more efficient.

I think no-one can solve this analytically, and I cannot model this easily with ML algorithms. Furthermore I think your problem specification is not clear enough. For instance, there are not enough constraints, and you don't say how many types of agents there are.

In any regard, this seems to be a job for the Netlogo agent-based-modeling software.

Answer part 1: You could reframe your question, assign it a "NetLogo" tag, ask again on stackoverflow.com. I happen to know that the Netlogo developers and other experts hang out there. You could get a much better answer than I could provide here.

Maybe someone has developed a NetLogo Model that is similar to your problem, and you can adapt and study it. (Netlogo has an internal grid-search tool called "BehaviourSpace"), you can export data, and there are APIs for connecting Netlogo with other tools such as R.

Answer part 2: In any case, this reminds me of the "El Farol" model included in the Netlogo agent-based-modeling software.

El Farol is a bar in Santa Fe, New Mexico. The bar is popular — especially on Thursday nights when they offer Irish music — but sometimes becomes overcrowded and unpleasant. In fact, if the patrons of the bar think it will be overcrowded they stay home; otherwise they go enjoy themselves at El Farol. This model explores what happens to the overall attendance at the bar on these popular Thursday evenings, as the patrons use different strategies for determining how crowded they think the bar will be. ... El Farol was originally put forth by Brian Arthur (1994) as an example of how one might model economic systems of boundedly rational agents who use inductive reasoning.

I have included a screeenshot so you'll get an impression what I'm talking about.

In the screenshot, replace 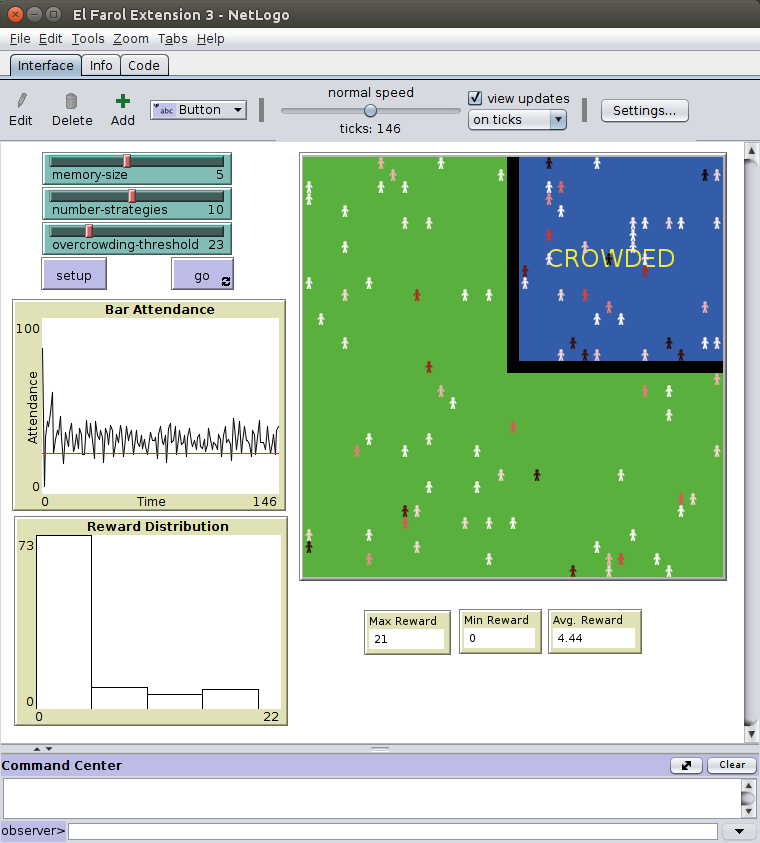 Not the answer you're looking for? Browse other questions tagged machine-learning algorithms optimization or ask your own question.

1
How to speed up optimization using Differential Evolution?
3
Which algorithm to use to predict the duration of some task
4
Catastrophic forgetting in linear semi-gradient RL agent?
1
Are there any learner-specific optimizers?
1
Can RNN be replaced with non-recurrent classifier for Sequence Classification problem?
2
Python - How to use ML to assign best possible weights to final stage of a NLP product title shortening algorithm to pick most descriptive parts