What happens if we flip the arrows in a Naive Bayes classifier? To clarify - from what I have found naive Bayes is defined for the following network structure:

I'm interested to understand what happens if instead from y->x the child will be y. As shown in the following: 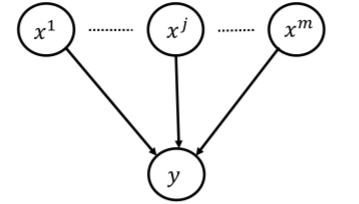 I'm not entirely sure if we get the same results as a regular naive Bayes classifier (intuitively we don't), and if not how to estimate both the likelihood of the network and the parameters?

For further clarification: lets say there is a training set of size n; each data point consisting of (x,y) where x is a vector of size m of binary values and y is the class and is also binary. E.g. (0,1,0,1,1) where the last index is the class. I'm trying to figure out the likelihood of the network (where y is the child) and how to estimate the parameters in the case of y being the child.

To elaborate on my comment, the first image depicts conditional dependence of $X_i | Y$ for $i \in 1,...,m$. Therefore, your likelihood for this model would be

The second image (bottom) depicts $Y | X_i$, therefore the likelihood would be

Assuming that both scenarios do not have conditional independence, the two are not equivalent!

Not the answer you're looking for? Browse other questions tagged classification naive-bayes-classifier bayesian-networks or ask your own question.