What are some possible techniques for smoothing proportions across very large categories, in order to take into account the sample size? The application of interest here is to use the proportions as input into a predictive model, but I am wary of using the raw proportions in cases where there is little evidence and I don't want to overfit.

Here is an example, where the ID denotes a customer and impressions and clicks are the number of ads shown and clicks the customer has made, respectively. 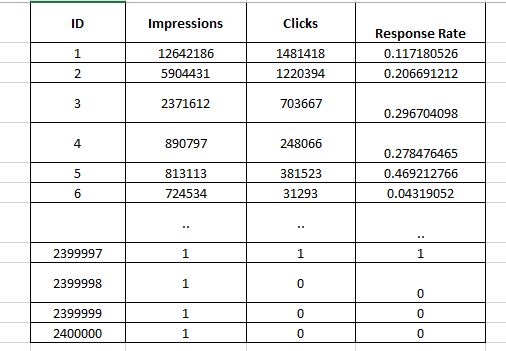 A simple way would be to consider Laplace Smoothing (http://en.wikipedia.org/wiki/Additive_smoothing ) or something like it.

Basically, instead of calculating your response rate as (Clicks)/(Impressions) you calculate (Clicks + X)/(Impressions + Y), with X and Y chosen, for example, so that X/Y is the global average of clicks/impressions.

The absolute scale of X and Y will determine how many data points you consider "enough data". It's been argued that the right thing to do is set X to 1, and Y appropriately given that.

Not the answer you're looking for? Browse other questions tagged machine-learning predictive-modeling feature-extraction or ask your own question.

6
Data driven approach to define a churn user
3
Predict which user will buy with an offer - discount
1
Predicting when a partition in Oracle database will be archived
0
Predictive Analytics on distributed systems vs standalone system
1
Machine Learning for user modelling
1
Fully endogenous models for predicting multivariate time series
9
What is the ideal database that allows fast cosine distance?