The right join for the right situation?

(Please pardon the pun in the question title.)

I understand the differences between a left join, a right join, an inner join and a full join. However, I am not sure how to explain to students when a particular join (say an inner join) is the appropriate join for that particular situation.

I am looking for three real-life examples:

I don't need all the details, but I do want the big picture ideas that show that in that real-life example, this join is most appropriate.

Note: I am teaching using the R package dplyr, so I have used the names of the dplyr join functions.

You're an online retailer. Like Amazon. You keep your purchase data for different categories of items in different tables, but all website users have one account with one ID.

You inner join to find the User IDs and purchases for people who bought clothing and books. Any users who didn't buy both of these items will be 'dropped' from the final table.

Left Join You have one dataset with User IDs and account info(e.g. age, name) of all users. You want to build out this table to include some sales data, without dropping people from your complete list of users. So you would left join your purchase dataset to your account dataset (with User ID as the key). Any user who has made no purchases won't be dropped from your final table.

Right Join The opposite of left join. E.g. you want to keep all purchase data, even if for some reason your Account Info table does not contain the ID of the user who made that purchase.

Full (Outer) Join You want to Join account info and purchases tables, but you don't want to lose any entries in either table. So your final table will include Users who have made no purchases, and (perhaps mysteriously) purchases who have no users associated with them.

You can explain them using Venn diagram. 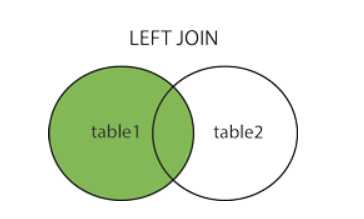 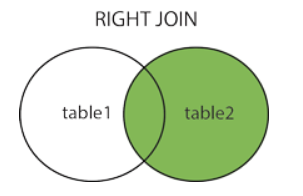 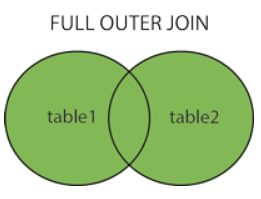 See more details about the query and examples here.

Take, for example, an imaginary database of a "school" with three tables:

In this context you could explain the joins as follows:

Inner join would be a natural operation for answering queries like "what courses is this student enrolled in" or "what students are enrolled in this course".

However, if a student is not enrolled in any courses, the query above would simply return no rows, whilst you might still want to have one row with the name of the student in the output and a NULL/NA value as its only "course". In this case you could prefer a left join.

The need for left/right/outer joins is even more common if you need to do some aggregations later on. Suppose you need to output a table, listing all courses alongside with the count of students enrolled in them. Using an inner join would only list the courses with at least one student. Using a left join would list all of them, including those with 0 students.

Right joins are somewhat esoteric and rarely used (I've written tons of SQL but never used a right join so far I think). Indeed, you can always use a left join in place of a right join, and most of the time people tend to think about data access in a "left to right" manner. The three possible situations for using a right join that I see are:

That was a long digression on right situations for right joins, let's get back to the outer join. It is also rarely used, in my experience. They say outer joins are harder for SQL engines to optimize (although I can't at the moment exactly see why so). Anyway, in our example one could use an outer join to create a table of the form (Course, List of Students), with two extra conditions:

That could be a perfectly useful table, right?

Not the answer you're looking for? Browse other questions tagged sql or ask your own question.

4
Data store for testing data products?
5
Storing Sensor Data for Analysis of the Office
1
Left Join with b.key being NULL in R
1
Data dashboard for SQL server database
3
How to find the values that never matched in a full join
0
CASE sentence for SQL query
1
Optimization technique for iterative distribution