Is R2 score a reasonable regression measure on huge datasets?

I'm running a regression model on a pretty large data set and getting a fairly woeful $R^2$ score of ~0.2 (see plot below), despite the plot looking like the model is generally pointing in the right direction.

My question is, when you have over a million data points, how high can you realistically expect the $R^2$ to go in real world data with a decent amount of noise?

What prompts by scepticism of such traditional measures are articles such as this that discuss how quantity of data can degrade statistical tests.

Let me know what you think and any regression examples using $R^2$ score as a quality metric. 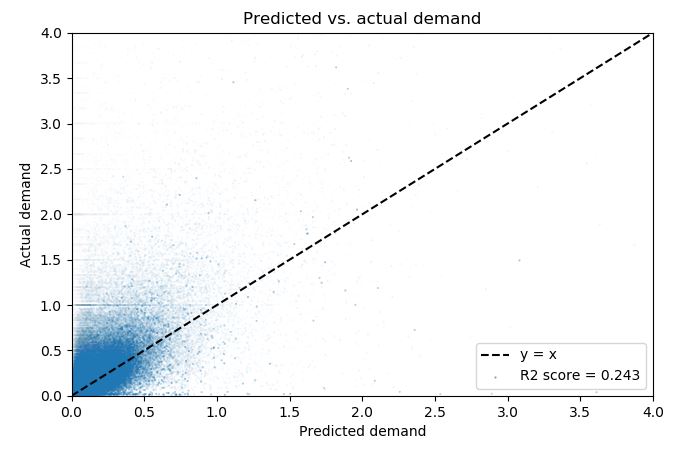 Just like other properties of normal distributed data, the estimation of $r^2$ improves when the amount of data increases. With very little data a coincidental colinearity might be the case, but this is not possible with large amounts of data.

Back to your example. Your data is cleary not normal distributed, it has right-skew and has large outliers. For this reason it is not advisable to use $r^2$. Imagine for example that in the lower left corner (where the majority of the data is) you would observe a negative trend, but in general there is a positive trend. The regression line would be the same and the $r^2$ would be in the same range. This is known as the Simpsons paradox.

The article you link to deals with statistical confidence, which is a very different issue than $R^2$. I would guess that given the amount of data, despite a $R^2$ score you consider is low, the p-value will be very high. The article touches upon p-hacking, which is an issue if you consider many possible inputs with competing models. With just one $x$, as is here, if this is the only model you have built, this is reasonable.

I think Paul's answer is a really good one. The one additional point I'd make about the $R^2$ score is that you should only compare different $R^2$ scores between models estimated on the same set of data. Conceptually, it does not make any sense to compare $R^2$ scores between models derived from different data because $R^2$ is itself just a measure of variance in the outcome explained by the model. Different sets of data will have different amounts of variance explainable.

This is a chief reason why defining a "good" $R^2$ score is hard. The $R^2$ score is of course dependent on your model's fit, but also on the data itself (and the set of data is dependent on its collection, as well as the domain from which it is drawn).

Not the answer you're looking for? Browse other questions tagged regression metric performance r-squared or ask your own question.

14
Performance measure: Why is it called recall and sensitivity?
2
Linear Regression - Metrics to consider?
3
Classification problem: custom minimization measure
2
Can macro F1 score be greater than micro F1 score?
1
Customer Intelligence - How to measure success?
12
Can the F1 score be equal to zero?
0
Regression on multiple datasets with a per-dataset variable
2
SKlearn PolynomialFeatures R^2 score