I have the below sets of data per application, you can call them as software metrics. These metrics vary depending on the size of an application.

The size of the application is determined by LOC (Lines of code), how can i showcase the complexity of each app relative to the lines of code if i visualize each of these parameters.

You could use the ratios of bugs (or any other variable) divided by lines of code (LOC). Since ratios may vary a lot for instance bugs vs. vulnerabilities the resulting plot oftentimes doesn't look as good so you could use a normalization procedure, in fact, is the recommended procedure.

In your case Bugs and a few vulnerabilities divided by LOC doesn't look too bad so I included the plot of raw ratios too in this example. I'm using a count overlapping points plot which is a variant of a barplot that doesn't fill bars and only cares about the value as a point. You could use any normalization that you feel gives you the best result. Here I'm only centering the data. In both plots the highest value means higher complexity according to the ratio metric. 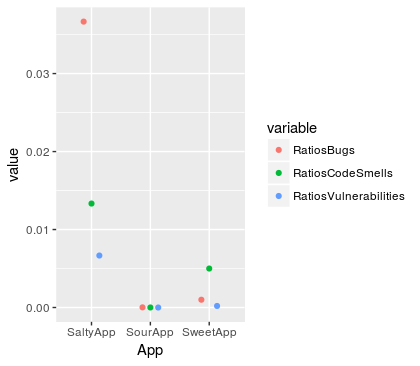 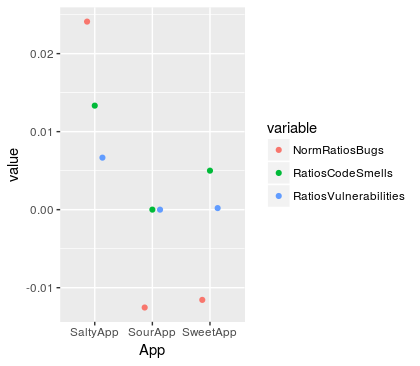 Code in R needed to replicate these plots