Following is a plot in Bishop's Pattern Recognition and Machine Learning explaining why $L_1$ regularization would lead to sparse solution, and I understand that in this case $w_1$ would be automatically constrained to be 0. However, it seems to me that it is not always true that the corner point is closest to the optimal unconstrained solution. For instance, if the optimal unconstrained solution is at the red cross, then there exists some point on the side that is closer to the red cross than corner points. In this case, do we still have sparse solutions?

However, whenever the coordinates of the red cross are off the line $y=x$ ($w_1\neq w_2$), you can shrink the regularization region so much that eventually you will end up with a similar picture as Figure 3.4 above. 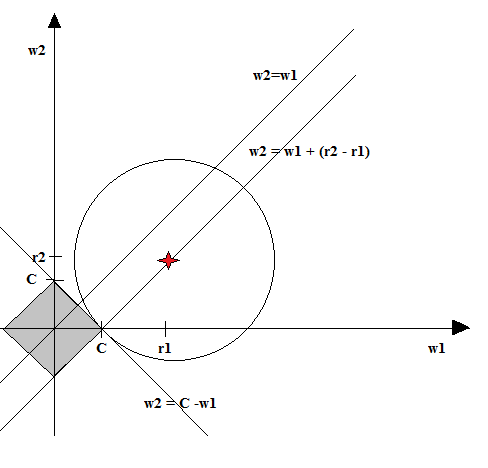 As Emre mentioned in the comments, this holds in general and you can "see" this from the Kuhn-Tucker conditions of the optimization problem.

Note that the plot only depicts two dimensions. In that example the $w_1$ coefficient is 0 while $w_2$ is something different from 0. Thus, you could say that the sparsity is 50% since half of your coefficients are 0.

Thus, the short answer is that with $L_1$ is just easier for the coefficients to be exactly $0$ than with $L_2$, where it is almost impossible. In fact, it is easy to compute the exact $\lambda_1$ for which all the coefficients of the solution are $0$. If you decrease that value you start observing that some of them are different from $0$.