tl;dr: You should project the gradients before feeding them to Adam. You should also do the clipping afterwards in case of non-linear constraints and to avoid accumulation of numerical errors.

First, assuming normal SGD, for the specific case of (approximately) linear equality constraints, this can be done by

In the general case, you will need to (also see the comments below and this thread)

Note that taking a small step $\epsilon$ computes a numerical approximation of the tangent space, which will work in a broader range of cases (e.g. for non-differentiable constraints). If you can, it will always be better (more exact and numerically stable) to analytically project the gradient. But this will obviously depend on your specific problem.

For Adam, you would use the projected gradient $g_p$ or its estimate $\widehat{g}_p$ and feed it to Adam. Adam then does its thing (estimating first/second moments, rescale/normalise gradients) and do a preliminary update step $$ \widetilde{x}_{n+1} = x_n - \alpha \widetilde{g}_p~, $$ where $\widetilde{g}_p$ is Adam's modified version of the projected gradient (based on the current and past gradients you fed it), and $\alpha$ is its learning rate. Last thing to do is the final projection: $$ x_n = \pi_C(\widetilde{x}_{n+1})~. $$

Background: The problem is not the exponential moving average but Adam's gradient normalisation based on the second moment. Essentially, the average gradient is rescaled by its average magnitude, which (for unconstraint problems) results in nice behaviour: If the magnitude is consistently small, gradients are scaled up to speed up convergence; if its huge, they are scaled down to avoid overshooting; if gradients are noisy around zero (small average gradient but large average magnitude), they are also scaled down, allowing for a precise convergence.

Edit: For linear equality constraints, it does not make a difference whether you first go into the unprojected gradient direction ($g$ below) and then project down, or you first project the gradient ($g_p$ below) and then take a step into that direction. For non-linear equality constraints, you would need to perform a second projection in the second case to correct for the errors due to the curvature.

For Adam, however, it makes a big difference because in the first case it sees a much larger gradient than in the second case. Adam tries to always make the effective gradient unit size, so it will scale down excessively in the first case. 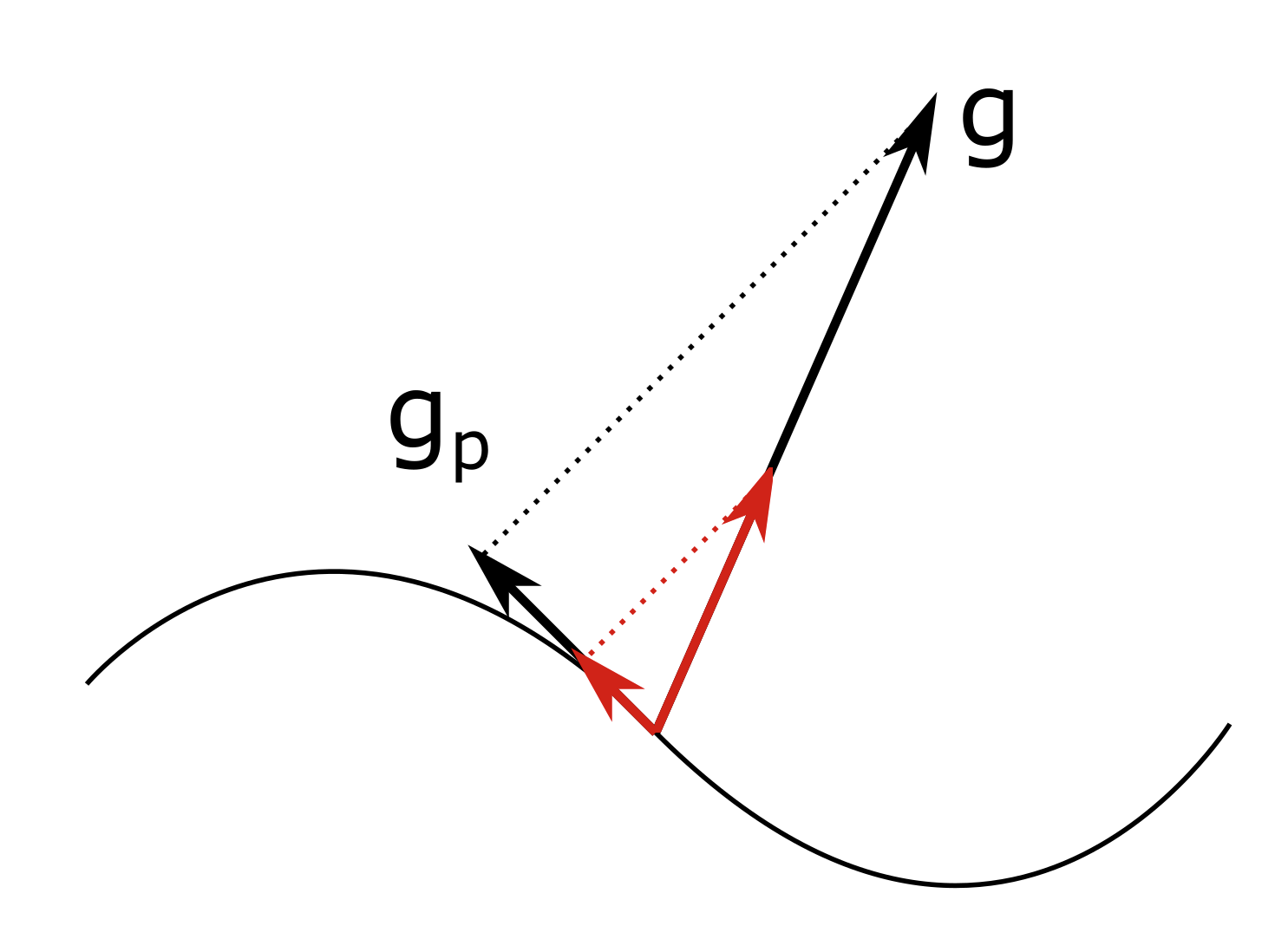 tl;dr: All gradient descent-based methods have an update rule similar to Adam's, so I think they'd all give you some grief. I don't know of any optimizers tailored to your application (but maybe you could invent one!)

According to this, Adam has four hyperparameters that typically don't require much tuning (although of course model hyperparameters will still need to be tuned, such as number of hidden units per layer, etc.)

The algorithm for Adam is explained in the 2015 paper (Algorithm 1). The exponential smoothing portion applies specifically to the (biased) estimates of the first and second moment. The only time your actual parameter value plays a role is in the calculation of the gradient, and then in the update.

In the update step (last part of the while loop in Algorithm 1), you perform this calculation:

If you restrict x to be greater than or equal to 0, then if x_{t-1} ever becomes zero, you can no longer update (the subtraction of alpha*(stuff) would result in something less than 0, which you then clip to be 0, which means you'd get 0 as the result in each subsequent update step).

Maybe that's the source of the issue? If so, I would recommend restricting your entire parameter space to be above zero. That is, in your initializer, make sure the initial values are all positive (i.e. don't use Glorot/Xavier initialization, because you could get initial values less than 0, as this initializer is based on the Normal distribution).

Not the answer you're looking for? Browse other questions tagged neural-network optimization gradient-descent momentum or ask your own question.

7
clipping the reward for adam optimizer in keras
13
Is Gradient Descent central to every optimizer?
3
How is Stochastic Gradient Descent used like Mini Batch gradient descent?
2
How similar is Adam optimization and Gradient clipping?
2
Adam Optimiser First Step