How do i interpret this correlation

Any additional things i can interpret from below ? 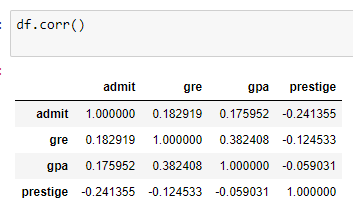 No. From this correlation matrix you cannot draw the conclusion that

The reason is that correlation is a measure of association between single pairs of variables. The conclusion you draw above - on the contrary - is based on a combination of three different variables plus the outcome variable.

If you want to get an estimation of the probability that a student will be admitted to college based on her gpa, gre and prestige the right way is to create a logistic regression model. Here's an example in R (provided that admit is a binary variable, with admit=1 indicating that the student is admitted and admit=0 that she is not admitted)

With this fitted model you can then compute the probability that a student is admitted given her particular combination of gpa, gre and prestige.

Not the answer you're looking for? Browse other questions tagged correlation or ask your own question.

1
Calculating correlation of slightly out of sync data
3
Standard correlation coefficient of various datasets
1
how to deal with two high correlations feature which both has a low correlation with target
2
How to wisely choose machine algorithm for the given data set?
3
Chose among highly correlated variables
2
Correlation based Feature Selection vs Feature Engineering
1
Is converting a categorical value into numerical needed to find a correlation?
1
What conclusion can I get when the variable is influenced by other but there isn't any correlation?