Can you reuse observations from your train data in your final test data?

For an employee population, I am trying to determine who among the employees are likely to get injured in the future based on 2 years worth of data.

Unlike in most machine learning problems where you try to predict based on unobserved data, I will be dealing with the same population since you do not see a lot of employee turnover in a short span of time.

I am using XGboost implementation. Of the whole population, my label tells whether the employee got injured or not. I used 70% of my data as my training set while tested the accuracy to the remaining 30%. I got a fairly decent accuracy rating. I was able to classify injured employees accurately by 90% (specificity). Although my negative prediction was only at 70% accuracy. my assumption is that those that were misclassified as injured although they were not in the last 2 years are those that are likely to get injured in the future or had been injured 2 years prior.

In short, my training data is a subset of my full population (new/ final test data). When I compared the results, the training and testing error were almost identical.

Is it because, a large portion of my final test data already learned from the observations also found in my training data?

If my methodology is unacceptable, What other options can I implement so my test data won’t recognize that some of the observations included in it were already in my training data set?

The Out of Bag(OOB) error in XG Boost is considered as a Validation error(test error). During Hyper-parameter selection in XG boost, OOB error is measured for different hyperparameters. In XG Boost algorithm, the decision trees are constructed by a random sample of observations and the successive decision trees are built by giving more importance to the observation which the previous trees are misclassified. As this XG boost keeps increasing the number of decisions trees, the validation error decreases and saturates at some point.

In your case, you can consider this OOB error as test error instead of creating a separate test set. 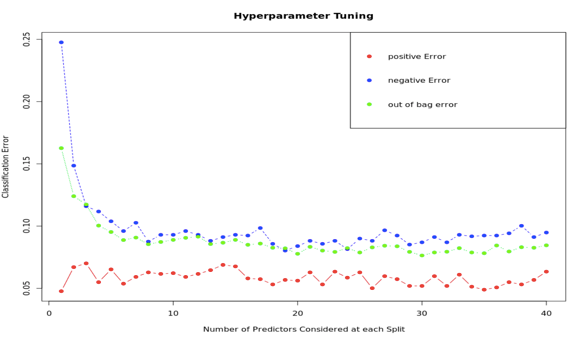 Not the answer you're looking for? Browse other questions tagged classification r xgboost or ask your own question.

3
Gradient Boosted Trees or Neural Networks Using Model Averaging?
5
Predicting contract churn/cancellation: Great model results does not work in the real world
1
Fitting and transforming text data in training, testing, and validation sets
0
Accuracy keep changing by changing randomState of classifier
2
XGBoost: Can the features in test data be a subset of the features used to train the model?
3
Do i need to use hyperparamters from Gridsearch to train on WHOLE training set to get final model?
1
How could a neural network classifer for multilclass problem classify only in one class when a decision tree is more balanced and accurate?
5
Is an $F_1$ score of 0.1 always bad?