What is the exact definition of VC dimension?

If you can find a set of $n$ points, so that it can be shattered by the classifier (i.e. classify all possible $2^n$ labeling correctly) and you cannot find any set of $n+1$ points that can be shattered (i.e. for any set of $n+1$ points there is at least one labeling order so that the classifier can not separate all points correctly), then the VC dimension is $n$.

Also Professor took an example and explained this nicely. Which is:

Then any 3 points can be classified by $H$ correctly with separating hyper plane as shown in the following figure.

And that's why the VC dimension of $H$ is 3. Because for any 4 points in 2D plane, a linear classifier can not shatter all the combinations of the points. For example, 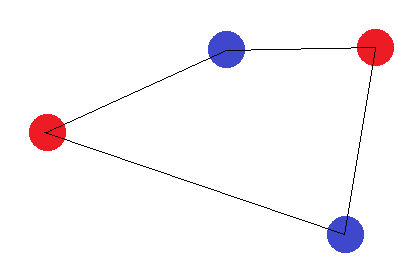 For this set of points, there is no separating hyper plane can be drawn to classify this set. So the VC dimension is 3.

I get the idea till here. But what if we've following type of pattern? 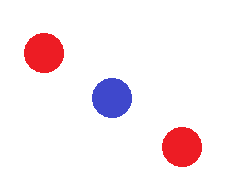 Or the pattern where a three points coincides on each other, Here also we can not draw separating hyper plane between 3 points. But still this pattern is not considered in the definition of the VC dimension. Why? The same point is also discussed the lectures I'm watching Here at 16:24 but professor does not mention the exact reason behind this.

Any intuitive example of explanation will be appreciated. Thanks

The definition does not say: if any set of n points can be shattered by the classifier...

If a classifier's VC dimension is 3, it does not have to shatter all possible arrangements of 3 points.

Not the answer you're looking for? Browse other questions tagged machine-learning classification vc-theory or ask your own question.

14
Dimensionality and Manifold
9
Classify multivariate time series
7
With regards to VC-dimension, why can you shatter 3 points with circles but not 4 points?
0
Why the VC dimension to this linear hypothesis equal to 3?
2
Why is a lower bound necessary in proofs of VC-dimensions for various examples of hypotheses?
1
VC dimension of half spaces over the real line
1
Lime Explainer: ValueError: training data did not have the following fields
1
Do I use the mean vector from my training set to center my testing set when dimension reducing for classification?