I've read many explanation on how do to policy iteration, but I can't find an example, so I'm stuck right now trying to figure out to Policy Iteration. 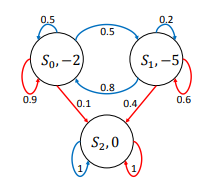 The numbers next to each state show the reward received for arriving in that state. For example, if the agent started in $S_0$ and took the $Blue$ action, and ended up in state $S_1$, the immediate reward would be $-5$.

$S_2 $ state is the terminal state - game over. The two possible actions are Blue and Red as can be seen on the image.

I just need something to help me start, because no explanation really made me understand how do I start the policy iteration till convergence.

The overall process terminates when it is not possible to improve the policy in the second part. When that happens, then - from the Bellman equations for the optimal value function - the value function and policy must be optimal.

Not the answer you're looking for? Browse other questions tagged machine-learning markov-process or ask your own question.

0
Confusion in Policy Iteration and Value iteration in Reinforcement learning in Dynamic Programming
3
emission probability using hmmlearn package in python
52
What is the Q function and what is the V function in reinforcement learning?
1
Semi-gradient TD(0) Choosing an Action
9
Why does Q Learning diverge?
4
Catastrophic forgetting in linear semi-gradient RL agent?
3
Reward function to avoid illegal actions, minimize legal action and learn to win - Reinforcement Learning
3
About the time differences in the Bellman equation
8
Which ML approach to choose for the game AI when rewards are delayed?