How to cluster histograms or density distributions?

I have no idea where to start when it come to cluster distribution and finding out similar the similar one. Is there a package in R that does the job?

There are quite a few ways to measure the difference between two distributions. Take a look at this overview article on wikipedia.

One very common way that is used often in Machine and Deep Learning is the Kullback-Leibler (KL) Divergence. It is most commonly used in minimising the cross-entropy between the distribution of your training data and the expected (generalised) distribution of the problem you are analysing. In general, a value close to 0 indicates that two distributions are expected to show similar behaviour, while a large value indicates the distributions behave very differently - so knowing the first distribution doesn't help you know anything about the second.

A more general class of measures of dissimilarity between distributions is the so called $f$-divergence, "an average, weighted by the function $f$ of the odds ratio given by [probability measures] $P$ and $Q$". The Wikipedia article contains a formal definition and a table with functions $f$ that give some popular dissimilarities/distances, including the KL-divergence.

The following table lists many of the common divergences between probability distributions and the $f$ function to which they correspond (cf. Liese & Vajda (2006)) 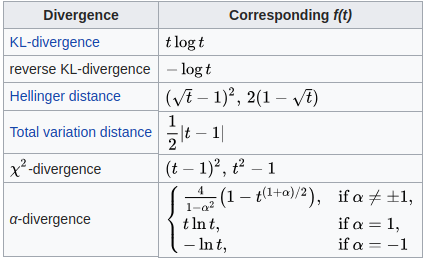 KL-Divergence is combined with the entropy itself, to define the cross-entropy. Take a look here, under the Information Theory View, for a bit more info.

Use the popular K-means clustering algorithm combined with Hellinger distance as a metric of distance.

Hellinger distance quantifies the similarity between two distributions / histograms, thus it can be very easily merged with K-means for your purpose :)

Install the broom package, and read the vignettes, especially "kmeans with dplyr and broom". This vignette contains a long, concise, worked example that might give you a head-start.

The broom package summarizes key information about statistical objects in tidy dataframes. This makes it easy to report results, create plots and consistently work with large numbers of models at once.

11
Solutions for Continuous Online Cluster Identification?
1
Cluster Similar Images into Folders
1
Notion of cluster centers and cluster comparison in Density Based Algorithms
1
Clustering by Distributions of Groups of observations
3
Find the shared properties of cluster samples
0
Efficient algorithm to find the lowest value cluster in a series of values
1
How come same cluster category be separated?
1
How to find farthest data points from a predefined cluster in a data set with Python?
3
How to do clustering assuring more than one class per cluster?