How to create a historical timeline using Pandas Dataframe and matplotlib

So I've seen a few answers on here that helped a bit, but my dataset is larger than the ones that have been answered previously. To give a sense of what I'm working with, here's a link to the full dataset. I imported this into a jupyter notebook using pandas. I've included a picture of one attempted solution, which was found at this link, right here: Example Picture. The issue is that 1. This is difficult to read and 2. I don't know how to flatten it out so that it looks like a traditional timeline. The issue becomes more apparent when I try and work with larger segments, such as this one: It's basically unreadable. Here's the code I used to produce both of these (I just modified the included code in order to change which section of the overall dataset was used).

This code semi-works, but I'd prefer if the bars were either closer together or differently colored and all on the same y-value. I appreciate any and all help. I've been trying to figure this out for about two weeks now and am hitting a brick wall.

Sorry for the late reply. I don't know whether the below kind of plot suffices for what you are looking. 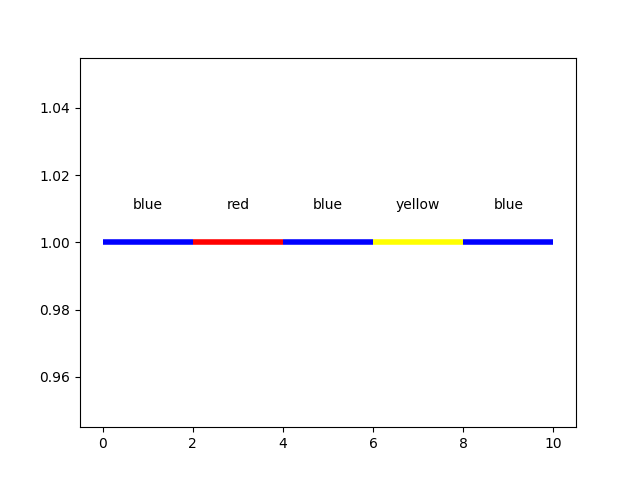 Let me know if this was helpful!

Not the answer you're looking for? Browse other questions tagged python time-series pandas matplotlib or ask your own question.

1
how to create multiple plot from a panda Dataframe
2
How to create a new dataframe using the another dataframe
2
matplotlib graph to plot values and variance
13
What do Python's pandas/matplotlib/seaborn bring to the table that Tableau does not?
1
plotting time series data using matplotlib python
0
Python: How to plot time interval from a Dataframe in Pandas