I am new to Data Science. Recently I was studying a course about statistics. One of the tasks there was to check the central limit theorem in practice.

The idea was quite simple: take a continuous random variable; generate, say, 1000 samples from it, each of size n; draw a histogram of the samples. Then find the parameters of the normal distribution using the central limit theorem and draw the PDF of the distribution. As a result, the histogram and the PDF should be, roughly speaking, "similar" (and become more "similar" as n grows).

I chose Pareto distribution and, with this Python code,

I got the next histogram and PDF as a result 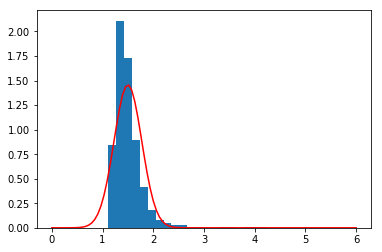 The result looked suspicious to me: there was no expected similarity. I checked the same code with another continuous distribution (with a uniform distribution), and the graphs looked much more similar.

Is it a feature of the Pareto distribution which makes it a bad choice to demonstrate how the central limit theorem works? Or something is wrong with the code itself (e.g., the parameters of the normal distribution are calculated in a wrong way)? Thank you in advance.

One key assumption of the central limit theorem is that the variance $\sigma^2$ of the underlying distribution is finite. I would guess that you are using a parameterization of the Pareto for which $\sigma^2 = \infty$, in which case the CLT will not hold. If you tweak your scale parameter so that $\sigma^2 < \infty$ you should see the result you want.

Not the answer you're looking for? Browse other questions tagged python statistics or ask your own question.

17
How does SelectKBest work?
1
scipy fit for t distribution seems broken for bi-modal data
1
Creating a posterior distribution for classic coin flipping in python using grid search
8
How does Naive Bayes classifier work for continuous variables?
1
How does personalized machine learning work?
0
How does $\chi^2$ feature selection work?
1
Implication of Central Limit theorem and its application in machine Learning
0
How does for loops and elif work with python pandas?