Rather use many linear classifiers than one complex one for numerical data?

I need to classify machine data (sampled by the second) and I need a prediction if a signal is good, medium or bad every ten seconds.

The data that I got from the machine at the moment look like this: 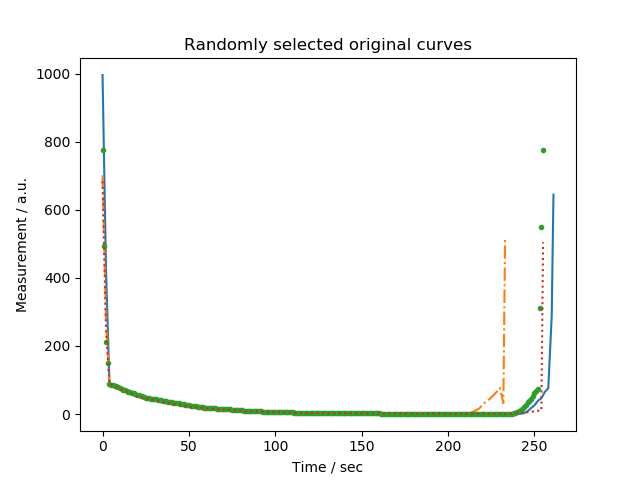 using different linestyles for better visibility. The performance of the machine can be fairly easy indicated by looking at the minimal value and the time it takes to reach this value.

In order to train an algorithm, I extended the database by first doubling it with a random smear effect and then I extended these curves that they reach the minimum later. Hence my extended database is 6 times larger then my start. 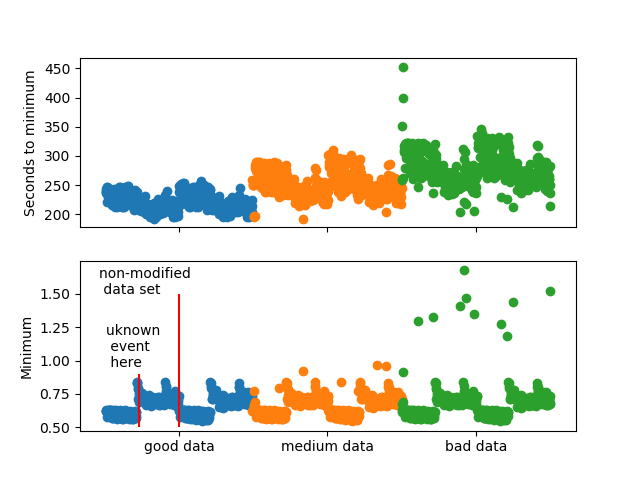 In the picture above, the second line denotes the set with which I started. The first red line denotes where something happened (the switching point was changed, so the process took less time and different minimum values were reached) which is not a major problem. I just wanted to mention it for a better understanding of the data.

To achieve one prediction every ten seconds for 200 seconds, I trained 20 models, one taking the first ten seconds, one the first twenty and so on. This worked well, after 30 seconds the confusion matrix shows at lest 94% correct predictions for every class, using a linear SVM. The earlier approaches probably cannot score well due to the data quality.

However, I also tried to make several classifiers which only looked 10, 20, 30 and 50 second into the past, no matter at which position in time. (See here for the algorithm Generate matrix from sliding window on vector) The first entry of the data always corresponded to the position of the frame. The classifiers took a long time to train and and even the 50 seconds classifier performs much worse than the 0-30 seconds classifier. I used linear SVMs here, too, and have not yet tried nonlinear methods.

And, to a lesser extend:

Trying to predict live, but without the benefit of a starting point: How to classify movement data (time series) in real time

Segmentation of data, but with different constraints: Is it possible to implement a classifier according to quarters? What about missing data?

Looking at different aspects of a dataset: How to make machine learning specifically for an individual in a group when we have the data on the group?

Browse other questions tagged classification dataset data-science-model or ask your own question.

7
How to classify movement data (time series) in real time
3
How to make machine learning specifically for an individual in a group when we have the data on the group?
2
Is it possible to implement a classifier according to quarters? What about missing data?

2
Spark 1.5.1: Train many binary classifiers, save them, then use them on new data
0
Is it normal for some classifiers to change their prediction performance from fixed amount of data each time I run them to train?
3
Detecting spammers with artificially generated target class
2
Train Test Split for overlapping samples
2
Procedure for selecting optimal number of features with Python's Scikit-Learn
0
K fold cross validation reduces accuracy
2
What is the proper way to use time-series data for classification?
1
Comparing multi-class vs. binary classifiers in predicting a single class