Is it possible to train a Machine Learning model with a set of the same data structure, but use another data structure as input in prediction/classification ? If so, how ?

Let me elaborate and explain my motivation :

I am a summer intern in a research lab (and will be starting my last year in Mathematical Engineering, so I am not too deep into ML yet, I will be specializing this year). I have followed the work of a previous intern on Chronicle Mining.

A Sequence is a list of timestamped events, e.g.

A Chronicle is a data structure based on graphs. It translates time constraints between events, or in my case, sequences of events. 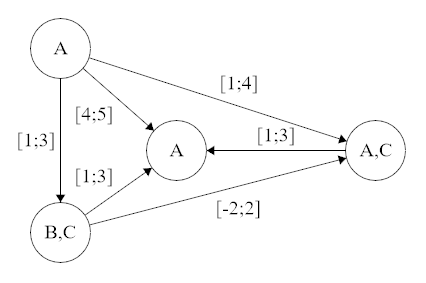 So as you can see, it is a directed graph, there can be mutliple nodes with the same label (which are sequences of events), multiple vertices with the same label (which are time intervals) and there can be negative values within the intervals. In my case, events are partially ordered (in this example it is lexicographical order) to make some things simpler.

I have accomplished efficient extraction of these weird things from sequential databases, so let's say I have a lot of them. In my case, there is always a final state (like the middle A in the example), and it is always the same (all sequences end with the same event/sequence).

Now, my tutor would like me to "perform Machine Learning" on these graphs. But there is a catch : the prediction/classification input has not the same shape as the training input. He would like for me to feed the algorithm a simple sequence (not a chronicle) and output some results. Thus, I have come up with two problems :

Both are similar, but one is a prediction problem and the second one is a classification problem. However, in both cases, I don't know where to start !

I have read papers on k-th steps sequence prediction with LSTM NN and other techniques, but what gets me is the fact that I apparently have to train my model with chronicles, but predict using sequences. Is that even possible ? Do I have to transform my chronicles in some kind of way ?

From what I understood from your problem, the chronicles are a way to model relationship between events and if so they are extracted from the sequential data (as a higher interpretation of data). I had a similar project involving Episode Mining in sequential database involving alarms.

The problem is whether you are trying to extract chronicles or use existent ones to predict something in a sequence (which is like using a pre-trained model).

Training a model mostly involves adjusting weights to inputs and applying (non-) linear functions on them in order to output the result in a certain format. (This is a very broad and abstract way of describing most ML algorithms)

So to answer your question, No you cannot do it in this broad way but you could try to make it so that the inputs are homogenous.

Building a model that extract from the sequence a chronicle would help or doing the exact opposite, generating a sequence with the chronicles and then perform machine learning.

Not the answer you're looking for? Browse other questions tagged machine-learning training graphs or ask your own question.

0
Process mining with ML
2
How to train a model to predict a time window than an event will occur on a website
2
How to find the probabilities of certain events occurring in a defined sequence?
3
How to predict constant failing of equipment
0
Classify graphs using machine learning
1
Modeling events at irregular intervals
1
Can RNN be replaced with non-recurrent classifier for Sequence Classification problem?
1
Low-dimensional path representation learning
3
Classification when the classification of the previous itens matter