What is the meaning of term Variance in Machine Learning Model?

I am familiar with terms high bias and high variance and their effect on the model.

Basically your model has high variance when it is too complex and sensitive too even outliers.

But recently I was asked the meaning of term Variance in machine learning model in one of the interview?

I would like to know what exactly Variance means in ML Model and how does it get introduce in your model? I would really appreciate if someone could explain this with an example.

It is pretty much what you said. Formally you can say:

Variance, in the context of Machine Learning, is a type of error that occurs due to a model's sensitivity to small fluctuations in the training set.

High variance would cause an algorithm to model the noise in the training set. This is most commonly referred to as overfitting.

When discussing variance in Machine Learning, we also refer to bias.

Bias, in the context of Machine Learning, is a type of error that occurs due to erroneous assumptions in the learning algorithm.

High bias would cause an algorithm to miss relevant relations between the input features and the target outputs. This is sometimes referred to as underfitting.

These terms can be decomposed from the expected error of the trained model, given different samples drawn from a training distribution. See here for a brief mathematical explanation of where the terms come from, and how to formally measure variance in the model.

Relationship between bias and variance:

In most cases, attempting to minimize one of these two errors, would lead to increasing the other. Thus the two are usually seen as a trade-off.

Cause of high bias/variance in ML:

The most common factor that determines the bias/variance of a model is its capacity (think of this as how complex the model is).

How to reduce the variance in a model?

The easiest and most common way of reducing the variance in a ML model is by applying techniques that limit its effective capacity, i.e. regularization.

The most common forms of regularization are parameter norm penalties, which limit the parameter updates during the training phase; early stopping, which cuts the training short; pruning for tree-based algorithms; dropout for neural networks, etc.

Can a model have both low bias and low variance?

Yes. Likewise a model can have both high bias and high variance, as is illustrated in the figure below. 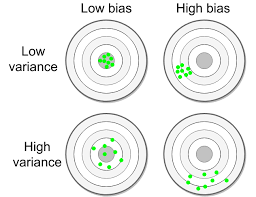 How can we achieve both low bias and low variance?

In practice the most methodology is:

Variance is the change in prediction accuracy of ML model between training data and test data.

Variance is the variability of model prediction for a given data point or a value which tells us spread of our data. Model with high variance pays a lot of attention to training data and does not generalize on the data which it hasn’t seen before. As a result, such models perform very well on training data but has high error rates on test data.

Error due to variance

7
How would you describe the trade-off between model interpretability and model prediction power in layman's terms?
1
Meaning of variance in machine learning models
3
Bias-variance tradeoff in practice (CNN)
0
PCA and K means in the context of machine learning
0
KNN Variance using a high value of K and cross-validation
1
What do "Under fitting" and "Over fitting" really mean? They have never been clearly defined
1
How does bias and variance relate with the training/testing error in Machine Learning. In layman terms does high variance means high testing error
0
variance explained by model