What is the difference between Hadoop and noSQL

I heard about many tools / frameworks for helping people to process their data (big data environment).

One is called Hadoop and the other is the noSQL concept. What is the difference in point of processing?

Hadoop is not a database, hadoop is an entire ecosystem. 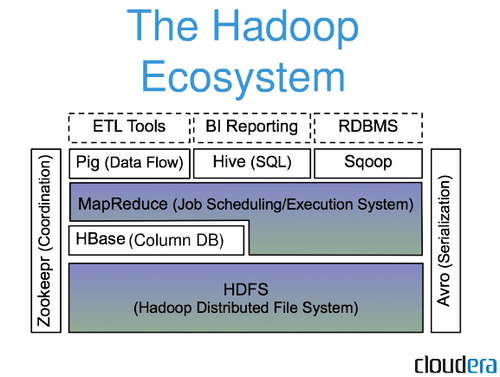 Most people will refer to mapreduce jobs while talking about hadoop. A mapreduce job splits big datasets in some little chunks of data and spread them over a cluster of nodes to get proceed. In the end the result from each node will be put together again as one dataset.

now hadoop would be done with everything. You can now load the result into the HDFS (hadoop distributed file system) or into any DBMS or file.

Thats just one very basic and simple example of what hadoop can do. You can run much more complicated tasks in hadoop.

As you already mentioned in your question, hadoop and noSQL are complementary. I know a few setups where i.e. billions of datasets from sensors are stored in HBase and get then through hadoop to finally be stored in a DBMS.

NoSQL is a way to store data that does not require there to be some sort of relation. The simplicity of its design and horizontal scale-ability, one way they store data is the key : value pair design. This lends itself to processing that is similar to Hadoop. The use of a NoSQL db really depends on the type of problem that one is after.

Hadoop is a system that is meant to store and process huge chunks of data. It is a distributed file system dfs. The reason it does this is that central to its design it makes the assumption that hardware failures are common, thus making multiple copies of the same piece of information and spreading it across multiple machines and racks, so if one goes down, no problem, we have two more copies. Here is a great link for Hadoop from wikipedia as well, you will see that it is, in my opinion more than just storage, but also processing: Hadoop

Not the answer you're looking for? Browse other questions tagged nosql tools processing apache-hadoop or ask your own question.

8
Cascaded Error in Apache Storm
2
Difference Between Hadoop Mapreduce(Java) and RHadoop mapreduce
0
Questions on "Active Archive"
3
Is our data "Big Data" (Startup)
6
Is there a benefit to using hadoop with only one node?
2
How many people can use a single Hadoop cluster at one time?
1
what ETL technique should i use for text documents using Hadoop?