I'm studying some event for a set of objects that can be plotted on a square $[0, 100] ^ 2$. I have used logistic regression to calculate probabilities that event occur for different objects and the output can be plotted as below: 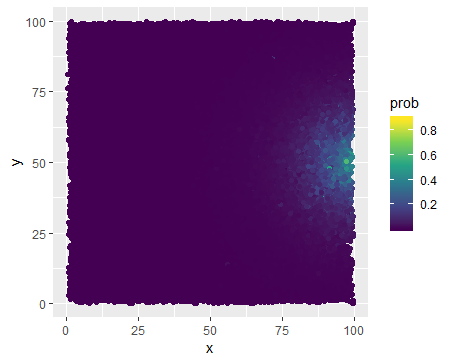 We can observe a high density around point $(100, 50)$ and that basically the farther the less probable the event is. A distance to this point is one of the predictors, but there are also few others. What I'm interested in is to capture a potential movement, i.e. how valuable is to move from point A to point B. But I would like to reward also those movements which are made far from the point $(100, 50)$, not only those near to the point. And for the former the absolute increase in probability will be small even if a movement is pretty significant (long distance), while for the latter we can observe a large increase in probabilities even with a tiny move. So I think what I would need is to somehow nullify/smooth effect of distance from $(100, 50)$, i.e. make it less significant for calculating our movement gain. And I don't really know how to accomplish that. I can't calculate the percentage gain, because this results in a really large gains. I think I need some monotonic transformation that would make a large probabilities lower and low probabilities higher. Any ideas what I could apply here?

You can calculate a distance in Euclidean space.

Given your specific goal, you can define a custom distance metric that would the equivalent of a hinge loss. For the most of the space, distance is not defined because the probabilities can be thresholded to zero. For a small section of space near (100, 50), there is a linear or nonlinear distance defined.

An alternative is to switch classifier to a support vector machine (SVM) with a hinge loss which would more directly model your problem.

Not the answer you're looking for? Browse other questions tagged logistic-regression probability information-retrieval data-science-model or ask your own question.