What mu and sigma vector really mean in VAE?

In standard autoencoder, we encode data to bottleneck, then decode with using initial input as output to compute loss. We do activate matrix multiplication all over the network and if we are good, initial input should be close to output. I completely understand this.

But within a Vae, I have few problems, especially in understanding latent space vector. I think I know how to create it, but I am not really sure what is its purpose. Here I will write a few ideas, please let me know if I am correct.

I would really appreciate very simplistic answers with simple examples if it is possible.

"why do we want to feed forward latent matrix with Gaussian distribution?"

To be specific, we feed a Gaussian distributed variable $z$ into the decoder network. This is the basic model assumption of VAE regarding how samples are generated. Notice that one of the main difference between VAE and standard autoencoder is that VAE is a generative model, in the sence that you can randomly generate samples, instead of using a input $x$ to reconstruct something similar to $x$.

If we imagine a VAE trained on the MNIST hand written digits dataset, we want to randomly sample $z$~$p(z)=\mathcal{N}(0,1)$, and feed this $z$ into the decoder network which give us the output distribution (which is again a Gaussian), and sampling from that output distribution results in an image of a digit.

"Why compare a distribution of Mu and Sigma matrices? "

We do not compare the distribution of $\mu$ and $\sigma$. As explained above, we are talking about the Gaussian distributed hidden variable $z$ (posterior $q_{\theta}(z|x)$) parameterized by $\theta=(\mu,\sigma)$. We compare the posterior distribution of $z$ with its prior ($p(z)=\mathcal{N}(0,1)$) and the difference (measured by their KL-divergence) is used as a regularization term in the loss function.

The reason for that is we want the latent representation $z$ to be close to its prior (standard Gaussian). This is relevant to how we generate samples from the VAE (we first sample from the standard Gaussian prior). If we encode a $x$ to somewhere very far from this prior, it will be unlikely that we can generate such samples.

For example, a well trained posterior (first two dimensions) for MNIST looks like this (photo from here) 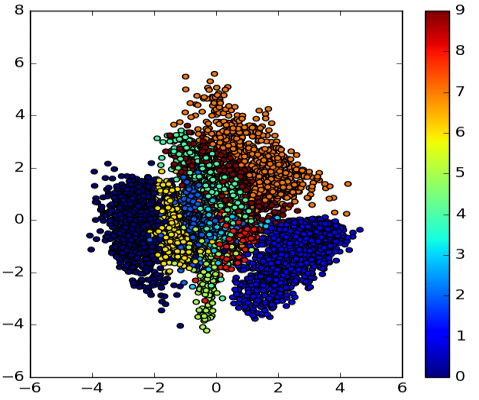 Notice that the posterior for each digit (e.g. dark blue for digit "0") is distributed like a Gaussian and not far from $\mathcal{N}(0,1)$, but difference digits do occupy different area.

Many online tutorials (e.g. here or here) have more detailed explanation about the concepts in VAE. I would suggest to read them.

Not the answer you're looking for? Browse other questions tagged neural-network autoencoder gaussian or ask your own question.

6
Why maximize ELBO in the variational autoencoder?
3
Intractability in Variational Autoencoders
0
how to design sigma(std) vector to have values above > 0 in VAE autoencoder
7
What is an autoencoder?
2
Why is it okay to set the bias vector up with zeros, and not the weight matrices?