Which is the fastest image pretrained model?

Can you tell the fastest pre-trained model available out there and the drastic time consumption difference amongst the above-mentioned models.

The answer will depend on some things such as your hardware and the image you process. Additional, we should distinguish if you are talking about a single run through the network in training mode or in inference mode. In the former, additional parameters are pre-computed and cached as well as several layers, such as dropout, being used, which are simply left out during inference. I will assume you want to simply produce a single prediction for a single image, so we are talking about inference time.

The basic correlation will be:

Having listed a few factors in the final inference time required (time taken to produce one forward run through the network), I would guess that MobileNetV2 is probably among the fastest pre-trained model (available in Keras). We can see from the following table that this network has a small memory footprint of only 14 megabytes with ~3.5 million parameters. Compare that to your VGG test, with its ~138 million... 40 times more! In addition, the main workhorse layer of MobileNetV2 is a conv layer - they are essentially clever and smaller versions of residual networks. 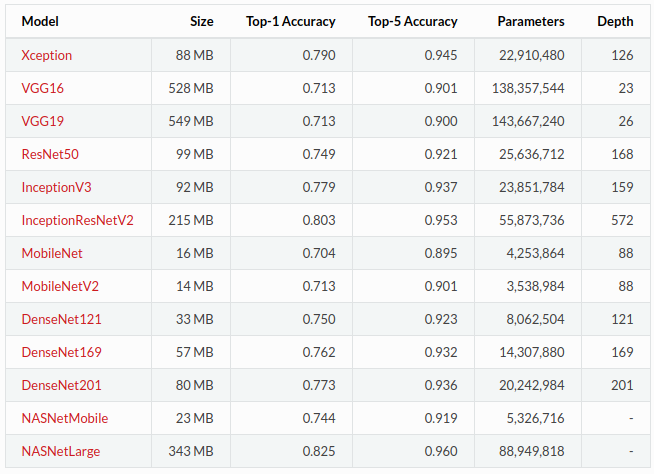 The reason I included the whole table above was to highlight that with small memory footprints and fast inference times, comes a cost: low accuracies!

If you compute the ratios of top-5 accuracy versus number of parameters (and generally versus memory), you might find a nice balance between inference time and performance.

Not the answer you're looking for? Browse other questions tagged deep-learning computer-vision transfer-learning inception finetuning or ask your own question.

1
Selection of base model for transfer learning

5
Type of images used to train a neural network
0
Preprocessing for finetuned CNN model from pretrained models
1
What is the difference between "offline trained model" and "pretrained model"?
3
PyTorch: How to use pytorch pretrained for single channel image
3
How to choose layer from which to unfreeze image classification model
0
Which part should be frozen during transfer learning?
1
Can we fine-tune a model on the same dataset which it is pretrained on?