For several months I browsed the internet hoping to find a user-friendly explanation of the Implicit Quantile Regression Network (IQN). But, it seems there is none at all.

How does IQN differ from Quantile Regression Network, in plain language?

In Reinforcement Learning, a DQN would simply output a Q-value for each action. This allows for Temporal Difference learning: linearly interpolating the current estimate of Q-value (of the currently chosen action) towards Q' - the value of the best action from the next state.

Quantile-Regression Network takes it a step further, outputting a range of values for each action. So if with DQN we had a vector of Q values, QR-DQN gives us a vector of sub-vectors of Q values. These Q-values are equally likely to occur when compared amongst each other (in that sub-vector).

For example, if we have 3 possible actions, QR-Network might output the following:

We can therefore say, that for the Action0:

To conclude, with QR-Net we demand it to output correct sub-vectors, knowing that each Q-score must have the same probability as others in that sub-vector.

Now, how does IQN work?

As I understood, we have to feed this $\tau$ as an input, into the network, along with the state vector (concatenating).

Does IQN output only 1 value per action, or a vector of vectors, like QR-Network does?

The IQN paper gives a picture, but I am unable to grasp the intuition behind the 4th image: 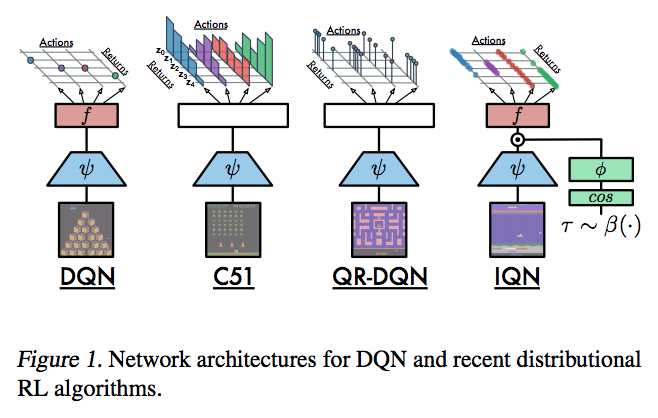 Why does the above image show the $f$ function being used in DQN and in IQN but not in C51 or QR-DQN? Does that mean that the output is no longer a vector of vectors, but is just a vector, like in a usual DQN?

The gist of IQN is in the following paragraph, but I just can't grasp it fully. What's the intuition behind the cosine? I know it's a periodical function, why does it get computed 64 times with i=0 to i=64, with the same $\tau$ (for example $\tau=0.4$ etc) 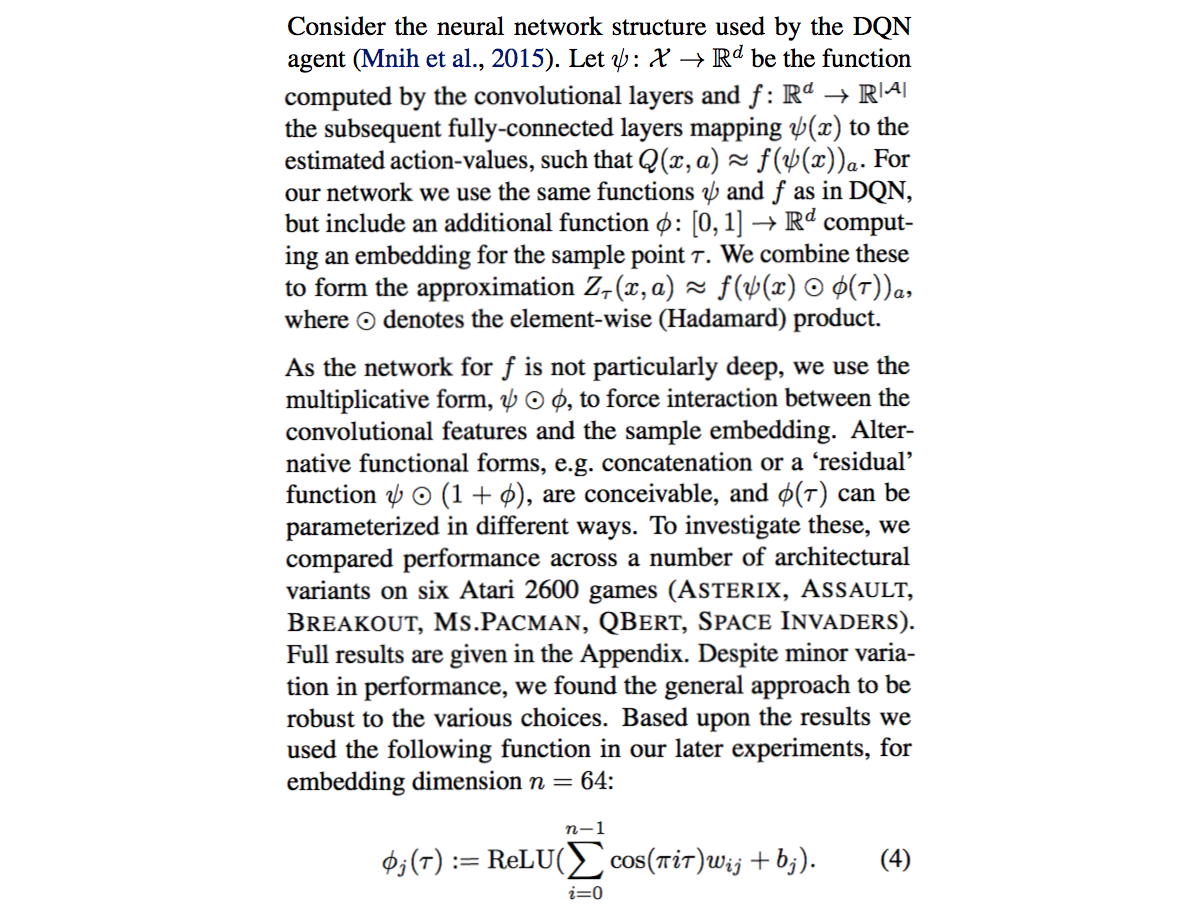 Would like to thank Will Dabney and Georg Ostrovski (two of the paper's several authors), and Massimiliano Tomassoli (Simple-Machine-Learning blog owner) for helping me understand IQN.

To understand this algorithm, you will need to know:

Just like C51 or QR-DQN, IQN allows us to estimate an entire distribution of possible rewards if we take some action $a$. However, IQN doesn't output a distribution like those did. Instead, it outputs a single sample every time you ask it. It outputs that red dot you see on the right, of the bottom image.

The final output of IQN is 1 scalar value per action. In other words, just a single sample per action. We re-run IQN several times to get more samples for the "CurrentState".

Why does feeding a random $\tau$ into the network work?

You have to understand that a well-trained IQN network represents an Inverse CDF itself. That is, given a request of some scalar 'amount' value (taken from a uniform range of 0 to 1), the Inverse CDF will output a value from the actual distribution, that sits at that amount.

Although distributions won't necessarily look like Bell-curves, have a look at this example: 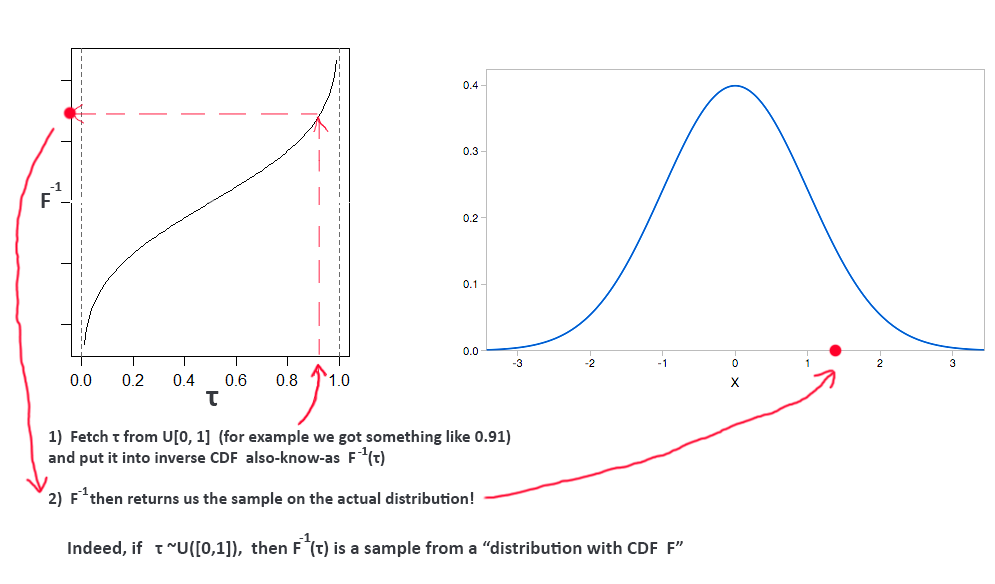 Why do authors use cosine inside $\phi(\tau)$ ? I still have no idea, but the Appendix section of the paper states it seems to work the best. Perhaps it works good with ReLU.

I also got confused by $w_{ij}$ or $b_j$. To me it seemed there is a matrix of weights and a vector of bias values. ...Do we input an entire vector of different $\tau$ values at once?

The answer is no. Notice, authors used $j$ only to remind that forward pass has to run several times. In total, there is only i number of weights in $\phi(\tau)$ and 1 bias.

Therefore, we get some scalar $\tau$, and use it with all those weights. Basically $\phi(\tau)$ resembles a simple fully-connected layer, which only accept 1 scalar input value at a time. We will re-use this same layer for different $\tau$ scalar values.

Kari's answer is concise and very informative. However, the explanation for Equation 4 is slightly incorrect. (final section of the post)

It's better to interpret the equation by layers: 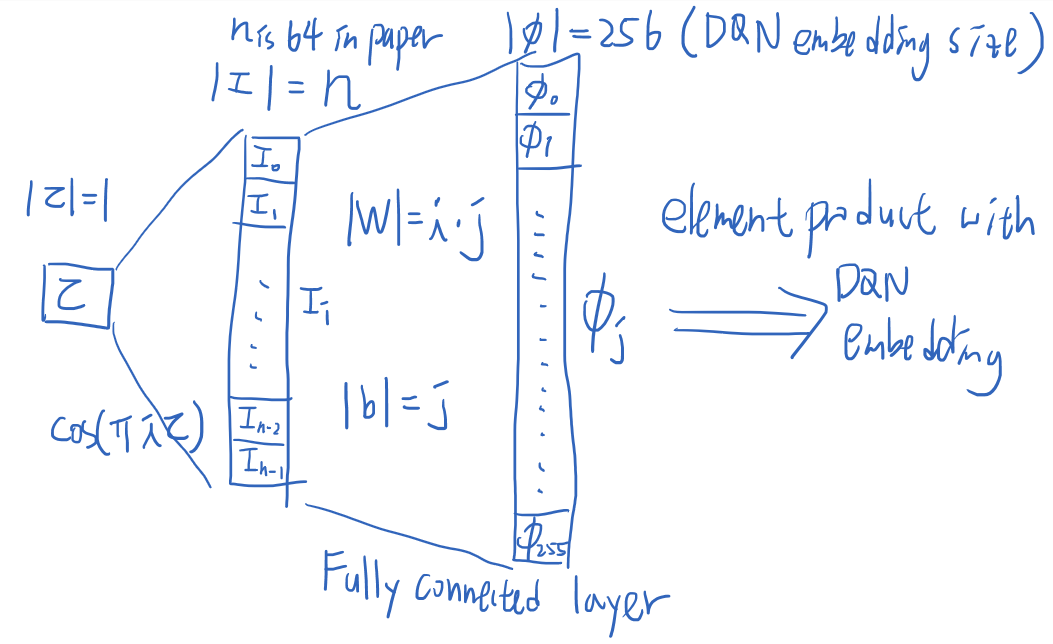 For multiple passes, we can simply treat all $\tau$ as a batch and run the forward pass in parallel.

The concept above is Universal Value Function Approximator (UVFA), while the cosine term is chosen since it results in good empirical results.

Not the answer you're looking for? Browse other questions tagged regression reinforcement-learning dqn or ask your own question.

3
Clamping Q function to it's theoretical maximum, yes or no?
10
Q-Learning: Target Network vs Double DQN
2
Why is Distributional DQN faster than vanilla DQN?
1
DQN - how is it possible to train separate outputs for each action?
1
Deep Q network disregards input, giving identical output no matter the input state
0
Neural Network does not learn regression
2
How to Form the Training Examples for Deep Q Network in Reinforcement Learning?