How to fill missing numeric if any value in a subset is missing, all other columns with the same subset are missing

There is a clear pattern that show for two separate subsets (set of columns); If one value is missing in a column, values of other columns in the same subset are missing for any row.

Here is a visualization of missing data

My tries up until now, I used ycimpute library to learn from other values, and applied Iterforest.

I noted, score of Logistic regression is so weak (0.6) and thought Iterforest might not learn enough or anyway, except from outer subset which might not be enough? for example the subset with 11 columns might learn from the other columns but not from within it's members, and the same goes for the subset with four columns.

So of course, dealing with missings is better than dropping rows because It would affect my prediction which does contain the same missings quantity relatively.

Any better way to deal with these ?

[EDIT] The nullity pattern is confirmed: 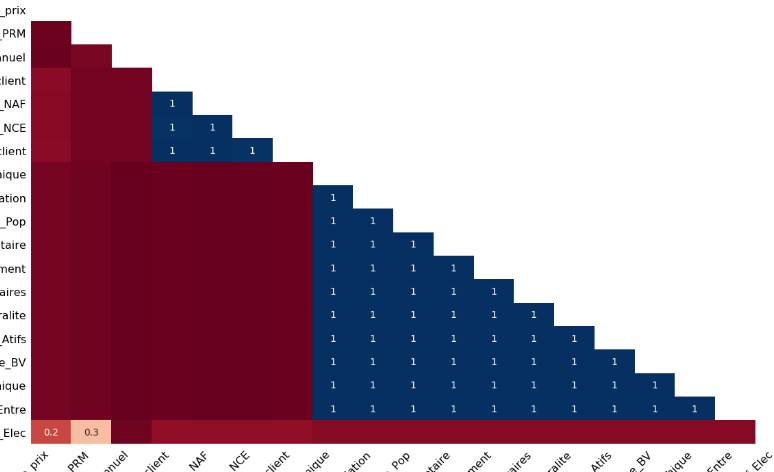 You should try all of:

Let's call your sets of columns A,B,C and D.

Looking at this explanation of MICE, it seems to benefit from random patterns in missing values. In your case, the chained equations will go only one way and repeated iterations as in MICE may not help. But the highly regular nature of your missing values may make implementing your own variant of MICE easier.

Learn with A,B,C,D with imputed values. Unlike MICE, your error will not be equal for all imputed values, so maybe you want to offset errors due to A by using the four data sets with different weights. "Rows with A are all original data, so this gets a higher weight". "Rows with B get a small penalty, because I have less data."

These four weights will be learned by another "stacked" classifier, sort of similar to the next section.

A possible disadvantage for imputing is that imputing may be inaccurate, and in the end you have different errors on different data points. So, skip imputing and just predict.

Instead of sorting columns in the order of most filled to least filled, sort the rows, i.e. data points, in the order: most columns to least columns.

Then you have four sets of data. Train a classifier for each one, one that uses all the data but fewer features, then one that uses more features but less data, until the last one which uses the most features but the least data. Which is individually the best? More Data or more Features. That's an empirical answer based on your dataset

You could also try chaining them, start from the last classifier using (least data, most features). The next classifier uses more data but fewer features. For some (the common) data, it has a new feature, 0 if the data point is "new" and $y_0$ if it comes from the old set.

There are three kinds of ensemble methods, Bagging which randomly samples less data to train classifier (helps with very noisy data and gives lower variance), methods like Random Forests which randomly throw away columns, and boosting which chains learning. You predict the values (with anything including Bagging and Random forest), then train another model (of the above type) to predict the residuals and so on.

You can look up the literature of these but honestly, those four classifiers (max data, min features),..., (min data, max features) can be easily generated with any library. Then use emsemble learning techniques to chain or stack classifiers.

I usually use mice for missing data imputation. It relies on chained equations and performs very well. It also has a random forest method, but typing methods(mice) you will find a list of available options, that can overcome the issues encountered by standard approaches such as logistic regression techniques. Another option is using the na.impute option available in caret package.

Not the answer you're looking for? Browse other questions tagged machine-learning correlation data-imputation or ask your own question.

4
Hive: How to calculate the Kendall coefficient of correlation of a pair of a numeric columns in the group?
0
how to do the imputation for categorical feature with a missing rate?
1
Why normalize when all features are on the same scale?
6
GAN - am I seeing mode collapse? Common fixes not working
2
How to visualize categorical data with numeric columns
1
All machine learning models are giving the same accuracy