I find the Notebook is running in CPU:

This is my Nvidia version:

running nvidia-smi, I'm getting this result: 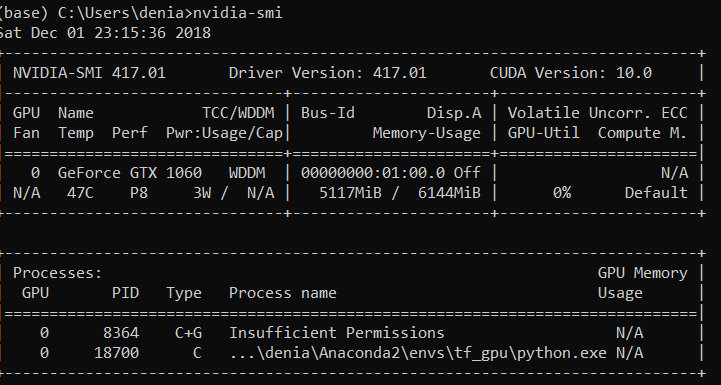 I want to make the neural network to train on GPU. Please help me in switching from CPU to GPU.

First some stupid sanity-check questions: do you have a GPU in your local machine? (you didn't mention that explicitly). I ask because it will not work e.g. on an integrated Intel graphics card found in some laptops.

Second, you installed Keras and Tensorflow, but did you install the GPU version of Tensorflow? Using Anaconda, this would be done with the command:

Other useful things to know:

If you have installed the correct package (the above method is one of a few possible ways of doing it), and if you have an Nvidia-GPU available, Tensorflow would usually by default reserve all available memory of the GPU as soon as it starts building the static graph.

If you were not already, it is probably a good idea to use a conda environment, which keeps the requirements of your model separate from whatever your system might already have installed. Have a look at this nice little walkthrough on getting started - this will likely be a good test to see if your system is able to run models on a GPU as it removes all other possible problems created components unrelated to your script. In short, create and activate a new envrinment that includes the GPU version of Tensowflow like this:

I would suggest running a small script to execute a few operations in Tensorflow on a CPU and on a GPU. This will rule out the problem that you might not have enough memory for the RNN you're trying to train.

I made a script to do that, so it tests the same operations on a CPU and GPU and prints a summary. You should be able to just copy-paste the code and run it:

Results from running on CPU:

Results from running on GPU:

Not the answer you're looking for? Browse other questions tagged keras tensorflow gpu nvidia or ask your own question.

7
After the training phase, is it better to run neural networks on a GPU or CPU?
37
Choosing between CPU and GPU for training a neural network
13
Make Keras run on multi-machine multi-core cpu system
0
Validation loss differs on GPU vs CPU
2
Using CPU after training in GPU
0
CUDA 8.0 is compatible with my GeForce GTX 670M Wikipedia says, but TensorFlow rises an error: GTX 670M's Compute Capability is < 3.0
0
How many neural networks can a GPU run simultaneously?
0
Deep learning : CPU vs. GPU quality