Is it necessary to tune the step size, when using Adam?

The Adam optimizer has four main hyperparameters. For example, looking at the Keras interface, we have:

Does this hold true in practice? I.e., is it true that, at least for a class of problems (say, image recognition), lr doesn't affect the optimization a lot, and thus we can just leave it at the default value of 0.001? Or is it still as extremely influential, as it is for SGD with momentum?

EDIT: to clear a misunderstanding brought up in an answer, learning rate and step size are synonymous. See the algorithm definition in the Adam paper: $\alpha$, whose default value is 0.001, is clearly named the step size. I reckon it's probably not a great name (the actual size of the step in the parameter space depends on the accumulated first order and second order momentums, as well as on the gradient, of course) but unfortunately such misleading terminology is the norm in optimization (at least in Deep Learning papers). 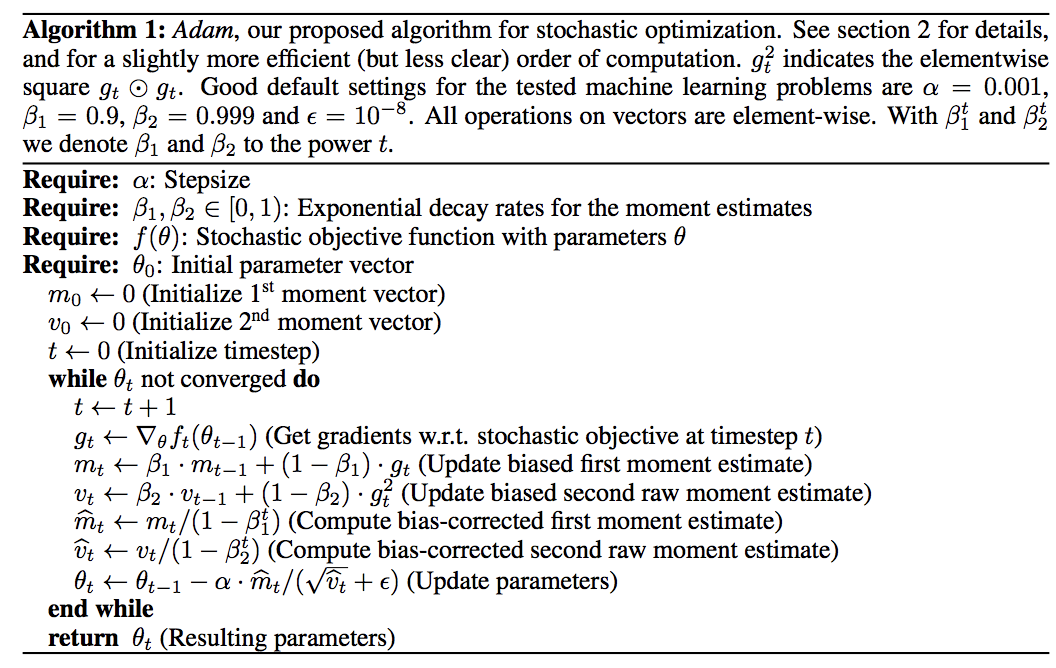 the lr (learning rate) parameter is the MOST influencial parameter for Adam (or any other optimization algorithm). I It does not mean step size... as that is not controlled by Adam but by the neural network and how you feed batches into it.

So yes, lr is very, very important, and it is the learning rate, not the step size.

Actually as mentioned by OP, the learning rate and step size are the same thing (my bad, I confused it with the batch size).

The rule of thumb is that a smaller learning rate provides a much stable learning curve... but a much slower one while a larger learning rate will converge quicker... but it will become unstable. So you will have to do a bit of exploration. I normally use 0.001 and 0.0001 but that depends a lot on the problem you are dealing with.

Also, as compared with SGD, Adam includes momentum, essentially taking into account past behaviour (the further away such behaviour is in the past, the least relevant it is) that is controlled by the beta params, but I do not recommend to modify them, as normally it is not required. So, although Adam is a more stable learning method (and normally a quicker one) than SGD, the learning rate it is still the most fundamental parameter to play with.

Not the answer you're looking for? Browse other questions tagged neural-network optimization hyperparameter-tuning learning-rate or ask your own question.

35
Why not always use the ADAM optimization technique?
4
Adam optimizer for projected gradient descent
2
How to handle the parameter space of neural networks?
10
Why my network needs so many epochs to learn?
5
Can I completely cancel the effects of using a smaller batch size by reducing the learning rate?
1
Relation between hyperparamters and training set for an object detection model
0
Hill Climbing Algorithm - Optimum Step Size
2
When is Non-Stochastic Global Optimization Preferable or Necessary?