What do we visualize in showing a VAE latent space?

I am trying to wrap my head around VAE's and have trouble understanding what is being visualized when people make scatter plots of the latent space. I think I understand the bottleneck concept; we go from $N$ input dimensions to $H$ hidden dimensions to a $Z$ dimensional Gaussian with $Z$ mean values, and $Z$ variance values. For example here (which is based off the official PyTorch VAE example), $N=784, H=400$ and $Z=20$.

When people make 2D scatter plots what do they actually plot? In the above example the bottleneck layer is 20 dimensional, which means there are 40 features (counting both $\mu$ and $\sigma$). Do people do PCA or tSNE or something on this? Even if $Z=2$ there is still four features so I don't understand how the scatter plot showing clustering, say in MNIST, is being made.

When people make 2D scatter plots what do they actually plot?

First case: when we want to get an embedding for specific inputs:

Note that "variance" vector is not used for embedding. However, its size can be used to show the degree of uncertainty. For example a clear "9" would have less variance than a hastily written "9" which is close to "0".

Second case: when we want to plot a random sample of z space:

Here is an illustration for the second case (drawn by the one and only paint): 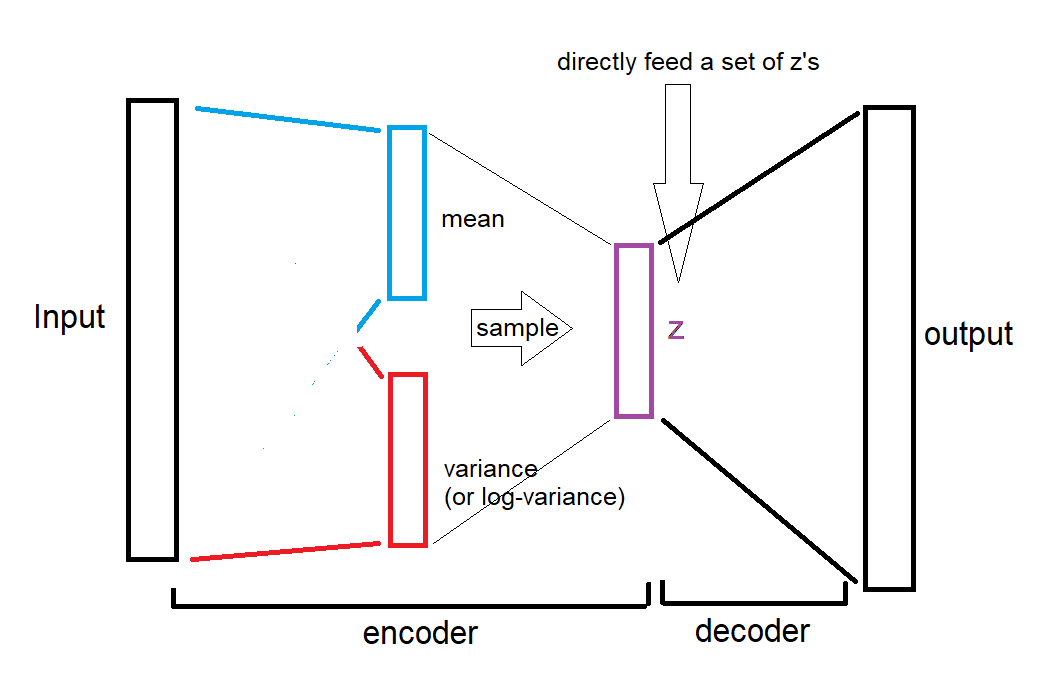 As you see, the mean and variances are completely bypassed, we directly give the random z's to decoder.

The referenced article says the same thing, but less obvious:

Below you see 64 random samples of a two-dimensional latent space of MNIST digits that I made with the example below, with ZDIMS=2

which means it only refers to the z vector, bypassing mean and variance vectors.

Not the answer you're looking for? Browse other questions tagged machine-learning autoencoder vae or ask your own question.

3
Latent Space of VAE
3
How to check quality of latent space like in β-VAE article?
3
VAE generates bad images. due to unbalanced loss functions?
2
Why KL Divergence instead of Cross-entropy in VAE
1
Latent variable graph in Variational Autoencoder