I have been playing with 2 dimensional machine learning using pandas (Trying to do something like this: https://github.com/freeman-lab/spark-ml-streaming), and I'd like to combine Lat/Long into a single numerical feature -- ideally in a linear fashion. Is there a "best practice" to do this?

A note: for those who've ended here looking for a hashing technique, geohash is likely your best choice.

Representing latitude and longitude in a single linear scale is not possible due to the fact that their domain is inherently a 3D space. Reducing that as per your needs would require a spatial flattening technique that's unheard of to me.

As far as lat/long merging goes, the best of best practices would be to resort to the Haversine formula, which calculates the distance between two points over a spherical surface, and receives those points' coordinates as input.

One way to incorporate that in your use case - where each point should probably have an independent lat/long combination - would be to assume the distance's origin point coordinates to be $(\varphi_1, \lambda_1) = (0, 0)$, which would render

However, as stated before, that couldn't possibly give you a linear relation, as you can see by 3d plotting the function: 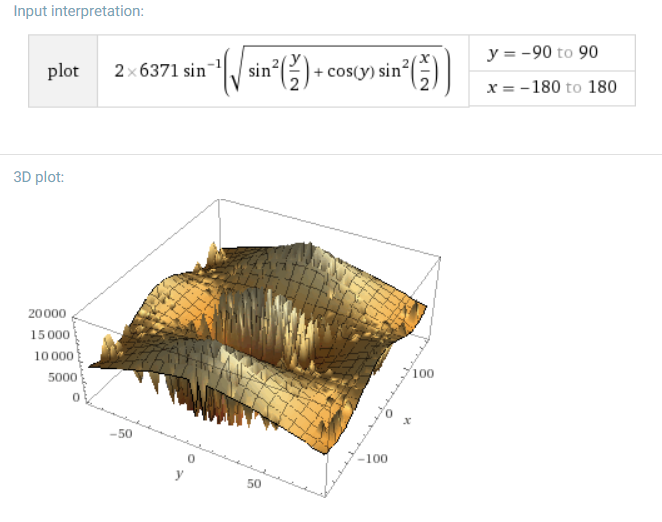 The circumstances imply you're likely to be using pandas, or at least should be. Here's an example implementation of this relativized Haversine formula:

Which could be used as in the below minimal example:

The best practice is to not attempt to flatten Earth into a onee dimensional line... Because as you may know, Earth more resembles a sphere than a line. It is much better to treat it as such properly.

There do exist approaches to flatten a k-dimensional space into a one dimensional order though. These are known as space filling curves and are from the 19th century. Their limitations are well understood: for many points they will work quite well - but in other locations they work really badly. As known from complex number theory, you cannot find a good linear order of a plane.

Not the answer you're looking for? Browse other questions tagged python pandas feature-engineering feature-construction or ask your own question.