Bias-variance tradeoff and the uncertainty principle

Bias variance tradeoff seems to behave like the uncertainty principle, is it just another name for the same principle?

No, the uncertainty principle describes a property that is specific to electrons. That electrons don't display their wave and particle properties simultaneously. Here from Wikibooks:

The Heisenberg uncertainty principle states that the exact position and momentum of an electron cannot be simultaneously determined. This is because electrons simply don't have a definite position, and direction of motion, at the same time!

This is due to the fact that electrons cannot exhibit both their wave and particle properties at the same time when being observed to interact with their surroundings. The momentum of an electron is proportional to its velocity, but based on its wave properties; its position is based on its particle position in space.

The bias-variance tradeoff describes a property of predictive models. That error from bias and variance usually exist in a tug-o-war where you cannot decrease one without increasing the other and that you have to find the perfect middle ground. You can observe it here from this Medium: 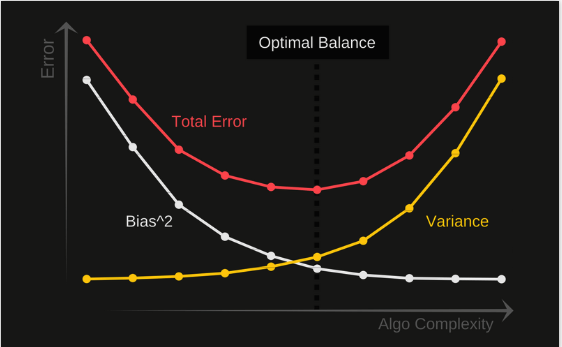 I agree that there are some similarities. There is a sort of tradeoff between measuring the momentum and position of electrons. But they are not the same thing.

Not the answer you're looking for? Browse other questions tagged variance bias or ask your own question.

8
Question on bias-variance tradeoff and means of optimization
1
How is the equation for the relation between prediction error, bias, and variance defined?
0
Maths question on mean squared error being dervied to bias and variance
4
Bias-variance tradeoff in practice (CNN)
19
Why underfitting is called high bias and overfitting is called high variance?
1
bias variance decomposition for classification problem
1
Why is there a trade-off between bias and variance in supervised learning? Why can't we have best of both worlds?
5
Bagging vs Boosting, Bias vs Variance, Depth of trees