I need some explanation for K-Nearest Neighbors algorithm.

K Nearest Neighbors is a Classification Algorithm. Just as with every classification algorithm is important that the algorithm doesn't "remember" the answers and that the answer it gets can be generalized to all the population, not just learned from the database.

The traininig process is needed in KNN because (as I stated before), we want to avoid it from learning-the-database, the famous "overfitting".

As you stated, in a regression the training is for finding the optimum parameters, here too, but the idea of "parameters" slightly changes: Here the parameters are the selected points (individuals) and of course, the $k$, separating in train/test allows the model to be more general when the test data is unknown.

The new datapoints (the ones from the TEST dataset) do not participate in a recalculation of KNN, the way the new points decide if they are blue or red is determined by the points which were calculated before (TRAIN dataset), by measuring which color the k nearest neighbors (of the new point) have.

For the new green point, with $k=3$, two were blue and one red, the new color is likely to be blue (and is assigned blue).

3. If the following code is executed then what does it exactly do? Does it mean that distances between TRAINING datapoints are calculated?

No, a more thoughful explanation would be that they are "memorized" in certain position and certain y_value. The calculation of distances is done when fitting TEST data.

4. If the following code is executed then what does it exactly do? The manual says that class labels for each data sample are returned. But how is it done? Does it mean that distances between TRAINING and TESTING datapoints are first calculated? If not then how can we find neighbours for "unseen datapoints" at all? We need to know distances.

As was explained in another point, the former code (fit) did not calculate distances, the code memorized the points. In the predict code, distances between x_train and x_test are computed, and for every member of x_test, the k nearest neighbors (from x_train) are found, and they vote to retrieve a class for this new datapoint (in x_test). 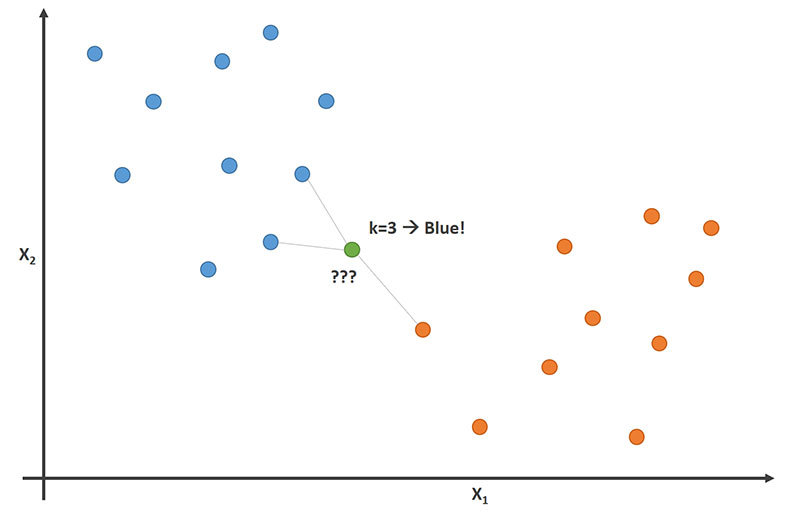 Not the answer you're looking for? Browse other questions tagged algorithms k-nn or ask your own question.

0
How to get nearest 5 points mean with Nearest Neighbours?
5
Sklearn: unsupervised knn vs k-means
4
Is there an algorithm that imputes missing values based on n nearest columns? (KNN hybrid)
1
Which kNN model to chose?
1
How are images (roughly) clustered when using KNN
3
Why does my KNeighborsClassifier graph look like this?
0
Need help understanding data leakage
2
KNN Imputation utilize mean or mode?
0
Does shuffling the training data matter in a K Nearest Neighbors Classifier model?