Do precision-recall curves have a constant shape/pattern?

I know ROC curve always looks like a stair shape and that I can evaluate AUC of ROC. And I know I can compute AUC of ROC curve to compare which model is better. What I wonder is:

I wonder if PR curve(Precision-Recall curve) has a constant shape(pattern)?

Can I compute AUC of PR curve to compare which model is better?

Yes. It is even preferred over AUC (of ROC) when classes are imbalanced in the test set (for example, check out this blog, this Kaggle notebook, and this 2015 paper). Here is an image from the referenced blog

which shows that PRC (right), unlike ROC (left), is robust to imbalanced classes.

And here is a quote from the referenced Kaggle notebook (texts in brackets are added by me):

which is illustrated as below 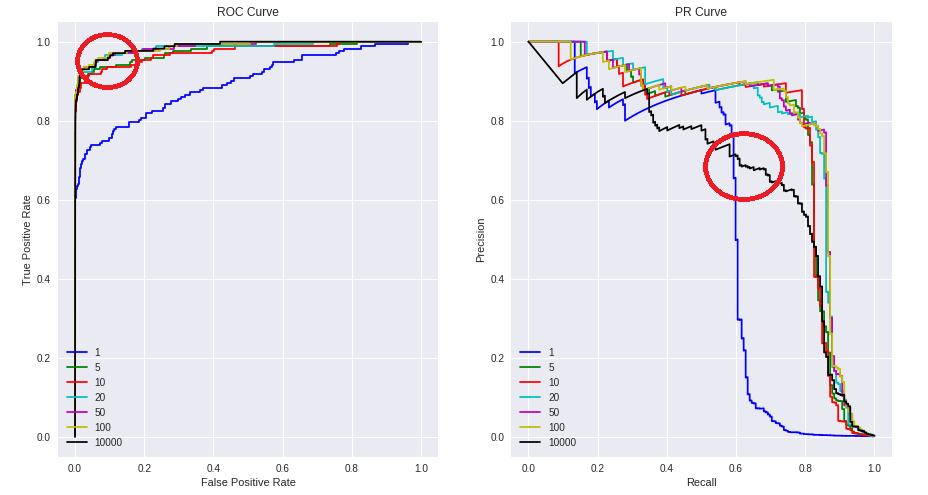 emphasizing on the black model (black curve) that is shown to be powerful in ROC but not that much in PRC; given that negative to positive ratio is around 600 (the ratio should be 1 when classes are balanced).

The perfect PR curve is upper right hand corner. You can compute compute the AUC of PR curve to compare models, and similar to an AUROC, a higher AU the PR curve would be better. Another option would be to choose a cutoff and compare methods there.

Not the answer you're looking for? Browse other questions tagged machine-learning evaluation or ask your own question.

10
Inverse Relationship Between Precision and Recall